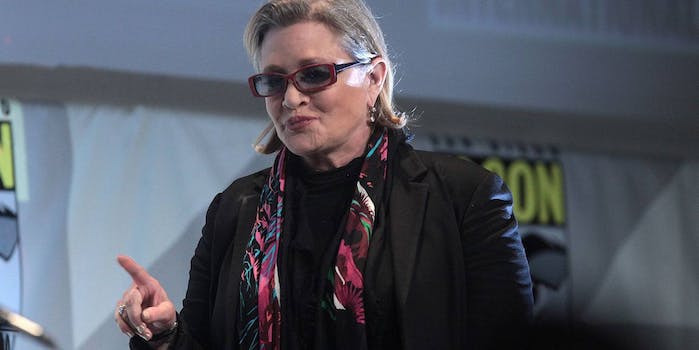 The actress was best known for her role as Princess Leia in 'Star Wars.'

After suffering a massive cardiac event on a flight from London to Los Angeles on Friday, Star Wars actress Carrie Fisher died today at UCLA Medical Center. She was 60 years old.

“It is with a very deep sadness that Billie Lourd confirms that her beloved mother Carrie Fisher passed away at 8:55 this morning,” the family confirmed via statement.

The daughter of a singer and an actor, Fisher was perhaps destined to land on the stage and screen. She’s appeared in dozens of films since her debut in 1975’s Shampoo, including Blues Brothers, When Harry Met Sally, Woody Allen’s Hannah and Her Sisters, and Jay and Silent Bob Strike Back. Lesser known is her work as a script consultant in Hollywood, which she did from the mid-1990s through the early 2000s on films as diverse as Sister Act, Hook, and Scream 3.

But Fisher was of course best known for her role as Princess Leia in the Star Wars films. She dropped out of Sarah Lawrence College to film A New Hope, George Lucas’s 1977 film that skyrocketed Fisher and her co-stars, Harrison Ford and Mark Hamill, to international acclaim.

Star Wars remained a constant thread in her career, with Fisher later working on the scripts of the prequel trilogy released between 1999 and 2005. For J.J. Abrams’ Episode VII chapter, which hit theaters in 2015, she reprised the role, now under the name Gen. Organa. Thanks to digital effects, Fisher’s face circa 1977 also appears in Rogue One, the standalone companion film released this month that acts as a prequel to A New Hope.

But it was a personal through line in addition to a professional one: Fisher revealed this fall that she and Ford had an “intense” affair while filming Star Wars in the ’70s, and she embraced the strong attitude of her on-screen character in responding to trolls online who criticized her for not aging well in The Force Awakens.

Her co-stars and friends are justifiably distraught at Fisher’s untimely passing:

I'm deeply saddened at the news of Carrie's passing. She was a dear friend, whom I greatly respected and admired. The force is dark today!

I thought I had got what I wanted under the tree. I didn't. In spite of so many thoughts and prayers from so many. I am very, very sad.

There are no words for this loss. Carrie was the brightest light in every room she entered. I will miss her dearly. pic.twitter.com/GgIeYGeMt9

"She was Princess Leia to the world but a special friend to all of us. We will miss her dearly." -Kathleen Kennedy https://t.co/E96OuqnFQL pic.twitter.com/lr0rm0sRxc

And, of course, her fans around the world are devastated by the loss of a female science-fiction icon, an outspoken advocate for mental health and addiction awareness, and a nerdy hero.

What an awful way to end 2016, you'll always be in our hearts. May the force be with you.

Numb. Unbelievable that such a bright funny loving spark could be extinguished. @carrieffisher you will be missed. I wish you peace.

Fisher is the latest in a long and brutal series of celebrity deaths in 2016, from George Michael on Christmas day, to David Bowie, Prince, Alan Rickman, and Gene Wilder. Fisher is survived by her daughter Billie Lourd and her loving French bulldog, Gary.