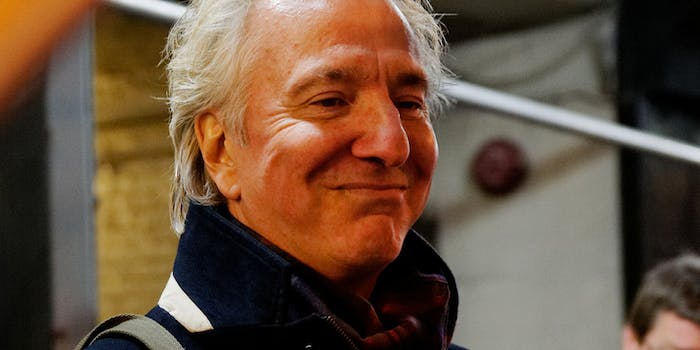 Rickman was beloved for his roles in 'Harry Potter,' 'Die Hard,' 'Sense and Sensibility,' and many other films.

Actor Alan Rickman, best known for his roles in Die Hard, Galaxy Quest, and the Harry Potter films, has died at age 69. His family confirmed that he had been suffering from cancer.

Rickman achieved fame playing darker roles like Rasputin, Professor Severus Snape, and the terrorist Hans Gruber, but he never allowed himself to be typecast. His career included diverse theater roles from Ibsen to Shakespeare, along with memorable appearances as a romantic lead in Truly, Madly, Deeply and Emma Thompson’s Sense and Sensibility. He also directed two films, The Winter Guest (1997) and A Little Chaos (2015), in which he also starred as King Louis XIV.

As an actor whose career spanned highbrow theatrical roles, historical dramas, Hollywood blockbusters, music videos, and audio recordings showcasing his iconic voice, Rickman won the hearts of fans in all walks of life. But even after he became an international star, he remained both private and modest about his achievements, making it clear that he didn’t take himself too seriously.

In 1999’s Galaxy Quest, he parodied his own career by playing a former Shakespearean actor who is only remembered for his role as a Spock-like alien in a sci-fi show, and while filming the Harry Potter series, he developed a mentor relationship with the young star Daniel Radcliffe.

His final film roles were voicing Absalom the Caterpillar in Alice Through the Looking Glass and starring alongside Helen Mirren in the drone thriller Eye in the Sky, both of which are set to be released in 2016.

Rickman is survived by his wife Rima Horton, a former economics lecturer and Labour Party councillor. The couple met in 1965 when both were still in their teens, and they married in 2012 after almost fifty years of partnership.

Photo via Marie-Lan Nguyen/Flickr (CC BY 2.0)