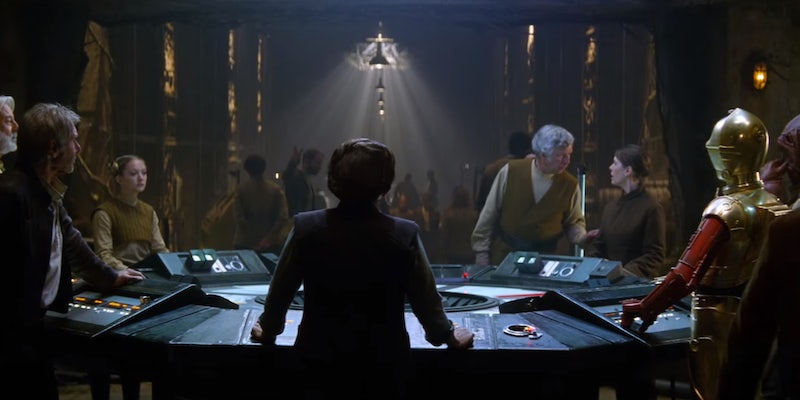 The criticism has taken a toll on her.

In Star Wars: The Force Awakens, former princess Leia Organa is now a high-ranking general of the Resistance. She’s in control of the war room, she plots how to take down the First Order—which rose from the ashes of the Galactic Empire she helped to destroy—and she has military leaders, pilots, and technicians awaiting her every command.

There’s plenty to dive into with Leia and where she’s going in future films, but some Star Wars fans are more interested in discussing how Carrie Fisher, the actress who plays her, looked in The Force Awakens—and how she’s aged since Return of the Jedi.

The famously blunt and cantankerous Fisher isn’t having it anymore. She took to Twitter Tuesday to respond to those critics, noting that their words have taken a toll on her.

My body is my brain bag, it hauls me around to those places & in front of faces where theres something to say or see pic.twitter.com/T2TXiEyl17

Fisher has been candid about the harsh reality of the entertainment industry, particular to women, during the Star Wars press tour. She revealed in Good Housekeeping that she was “pressured to lose more than 35 [pounds]” for The Force Awakens and commented on the insanity of Hollywood’s appearance obsession.

“Nothing changes: it’s an appearance-driven thing,” she said. “I’m in a business where the only thing that matters is weight and appearance. That is so messed up. They might as well say get younger, because that’s how easy it is.”

And on Good Morning America, she alluded to ageism in Hollywood as one of the reasons why it didn’t take much to convince her to play Leia again in Star Wars.

“I’m a female in Hollywood over the age of—let’s say 40 and we could also say 50,” she told Amy Robach. “So we could say it but not with real conviction or excitement. And they don’t have to ask you if you want to work at that age. You’ll see.”

Fisher then retweeted some of the nasty messages she had been receiving from fans.

@carrieffisher So you want the money & adulation that comes with being a famous actor but not the criticism. Whoever told you life was fair?

But she also found support from loving fans, who pointed out the double standard in not discussing Harrison Ford (Han Solo) or Mark Hamill (Luke Skywalker)’s aged appearances; Hamill even underwent a weight transformation of his own to play Skywalker again.

Cnet’s Bonnie Burton was relieved that the film let Leia age naturally, like it did with Han and Luke, when so often actresses are told that they are too old for a role as early as their 30s.

Had Fisher been airbrushed to look more like she did at 21, when she first appeared as Leia in “A New Hope,” I wouldn’t have laughed. But I wouldn’t have been shocked either. That’s how jaded audiences have become toward seeing older actresses in movies. They’re often replaced by younger actresses or made to look way younger than they are in real life.

Not in this case.

Meanwhile, The Force Awakens has made more than $1 billion worldwide and continues to break nearly every existing box-office record.