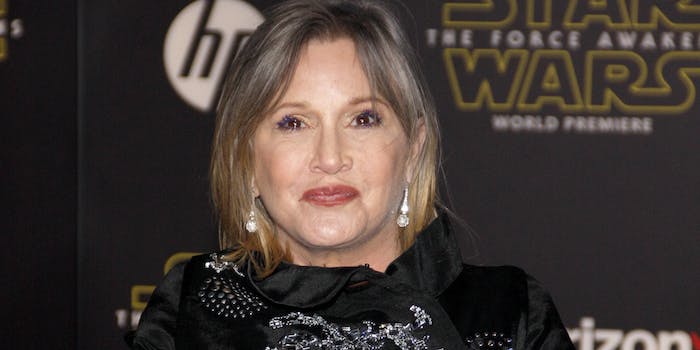 She was on a flight from London to LAX.

Carrie Fisher has been taken to UCLA Medical Center after suffering a heart attack on a plane, TMZ is reporting.

Law enforcement says her condition is “not good,” according to NBC Los Angeles.

According to TMZ, she was on a plane traveling from London to Los Angeles when she went into cardiac arrest and was given CPR by people on the plane. She reportedly has a pulse, and is currently on a ventilator.

Anna Akana, a YouTube creator who was on board the plane, told followers that Fisher had stopped breathing and she was given CPR until the plane landed.

After hearing the news, fans, admirers, and Fisher’s colleagues are sending their well wishes to Fisher for a full recovery.

Don't worry. Few people are stronger than this woman. pic.twitter.com/DQwbhy0s7J

I ask everyone to stop for a moment and send special thoughts to @carrieffisher.

Be well @carrieffisher. Thoughts, hopes, and the Force are with you.

Thoughts and prayers for our friend and everyone's favorite princess right now.. @carrieffisher

@carrieffisher The whole world is sending you so much love! Sending you the universes most powerful Force XXXXX❤❤❤

This article will continue to update as new information becomes available.