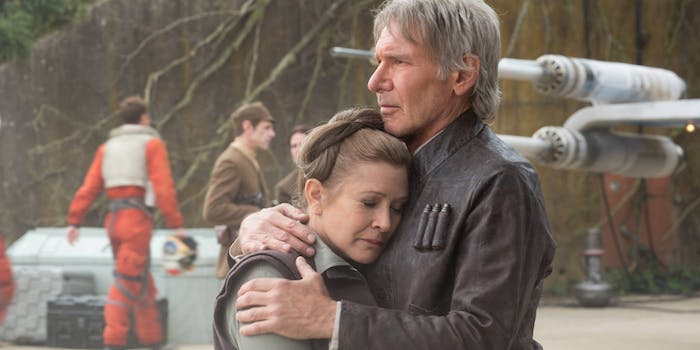 In her upcoming memoir The Princess Diarist, Carrie Fisher reveals what many fans suspected: She and Harrison Ford had an affair.

Radar Online published a handful of brief quotes from the book, detailing how the two actors hooked up while filming the first Star Wars movie.

Ford was 34 years old and married at the time, while Fisher was 19. According to her memoir, Fisher remembers being a “bad kisser” due to inexperience, and they first hooked up after she got drunk and he had to drive her home. The story doesn’t reflect very well on Ford, who Fisher also implied was rather disappointing in bed—but he got away with it because “he really was handsome.” They ended up having a three-month affair.

Carrie Fisher has often spoken about her crush on Harrison Ford during those early years, and her new book includes diary excerpts about her “relentlessly” pursuing him on set. She also adds, with characteristic openness, that she can’t remember much of the affair due to the “the brutal strength of Harrison’s preferred strain of pot.”