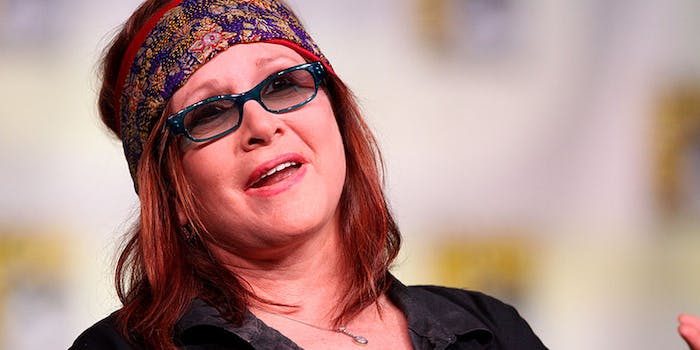 Carrie Fisher: ‘I would rather have played Han Solo’

“I would rather have played Han Solo,” says Carrie Fisher.

At the Hay Book Festival in Wales this week, the actress spoke about the recent Star Wars cast reunion. “We all look a little melted,” said Fisher, who at 57 is the youngest of the trio. “It’s good to see other melted people.”

When discussing her role in the original Star Wars trilogy, Fisher indicated that she always thought Han Solo looked like a more entertaining part than Princess Leia.

“When I first read the script I thought that’s the part to be, always wry and sardonic… I feel like a lot of the time Leia’s either worried or pissed or, thank God, sort of snarky. But I’m much more worried and pissed than Han Solo ever was, and those aren’t fun things to play.”

While Leia is always namechecked as one of the female icons of the sci-fi movie genre, Fisher would have been happy to have more action scenes. “I had a lot of fun killing Jabba the Hutt,” she added. “They asked me on the day if I wanted to have a stunt double kill Jabba. No! That’s the best time I ever had as an actor. And the only reason to go into acting is if you can kill a giant monster.”

Fisher was contracted to lose 35 lbs before reprising her role as Princess Leia, so hopefully that means she’ll be allowed more action scenes, rather than just having to lose weight for aesthetic purposes. At any rate, the recent casting of Lupita Nyong’o and Gwendoline Christie in Star Wars: Episode VII means that there will surely be a greater variety of female characters this time round.