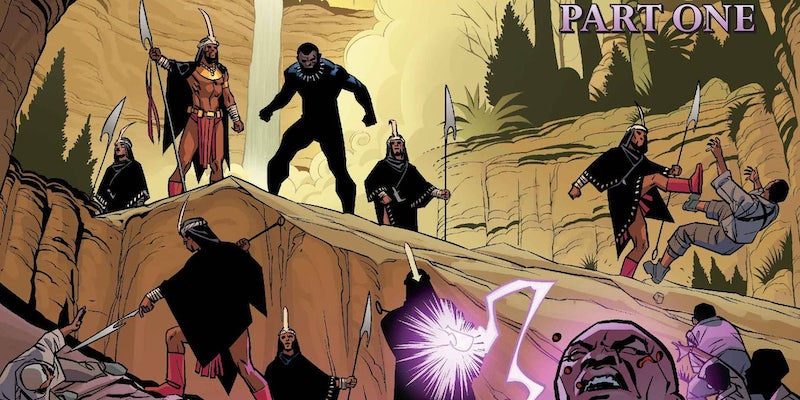 If you read one comic this month, it should be issue #1 of Marvel's new 'Black Panther.'

This review is spoiler-free

After centuries of prosperity, Wakanda is unused to strife. Yet in Black Panther #1, reeling from war, a devastating flood, and upheaval in the royal line of succession, Marvel‘s fictional African superpower seems headed for a revolution. Perhaps it is finally time for Wakanda to abandon the traditions of its Black Panther monarchy, deposing King T’Challa in favor of something else.

Granted spiritual and symbolic power by Wakanda’s Panther God, most of T’Challa’s strength lies in his political acumen and the fact that he was born into royalty. He is a king because his people allow him to be king, although maybe that’s about to change. The comic begins with his guards trying to quell a riot at a Vibranium mine, the mineral on which Wakanda’s economy relies, and T’Challa has to fight off rioters while wearing the Black Panther suit, which should otherwise be worn into battle with Wakanda’s enemies.

Within the first page, we see a visceral depiction of the complexity of T’Challa’s power: The king bowing down, wounded by a mundane blow to the head, yet unwilling to unleash the full strength of the Black Panther on his own people. The whole sequence may as well be lifted from the much-quoted Frank Ocean hook from Jay-Z and Kanye’s No Church in the Wild: “What’s a mob to a king? What’s a king to a god? What’s a god to a non-believer?” T’Challa is both a king and a god, of sorts, but his power cannot exist without the support of his subjects. And he and the mob both seek the same things: for Wakanda to thrive, and for its people to be safe. 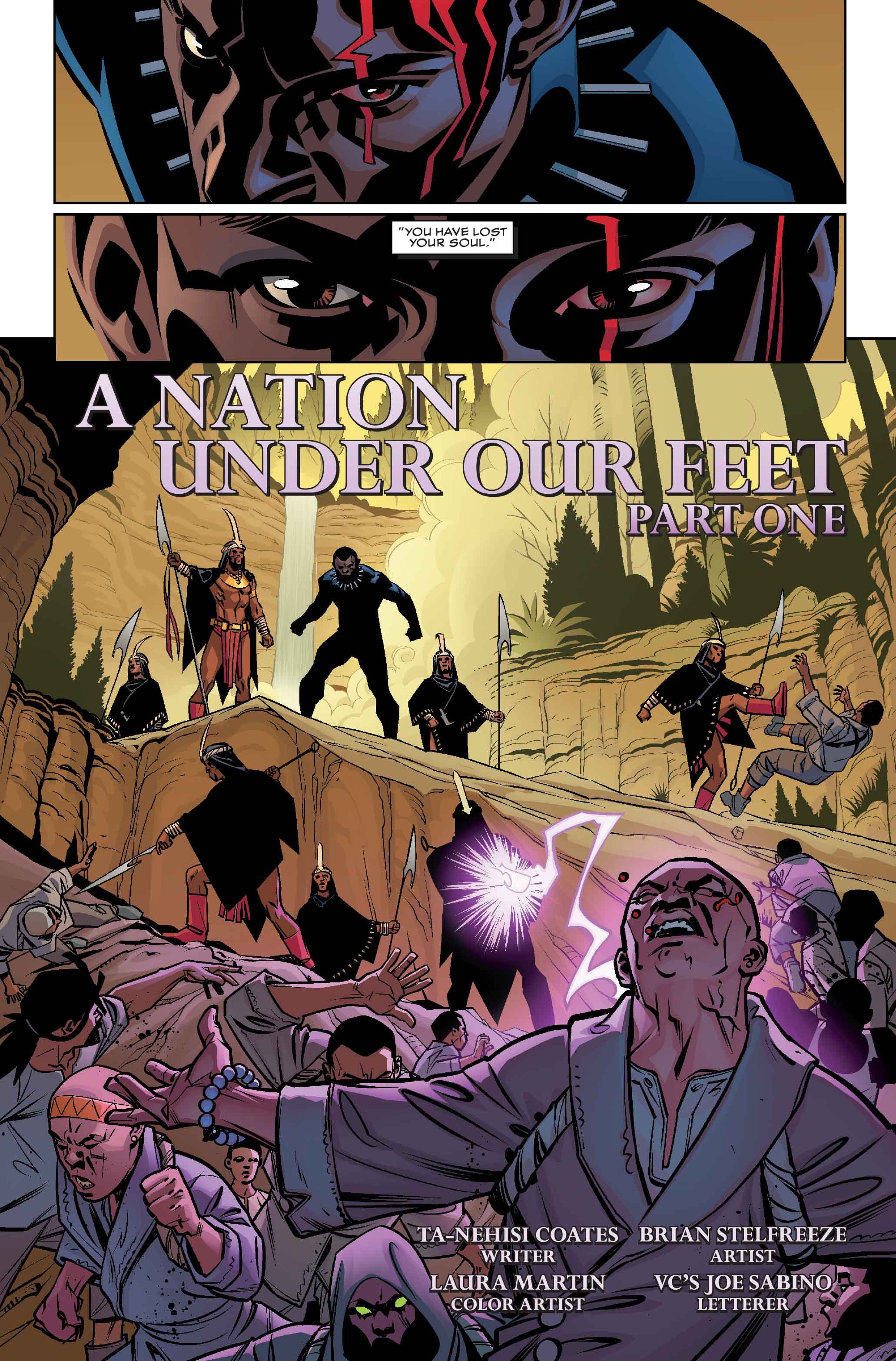 In collaboration with artist Brian Stelfreeze, this comic marks the fiction debut of journalist and author Ta-Nahisi Coates, best known for his book Between the World and Me. Within a couple of pages, it’s obvious that Coates and Stelfreeze’s Black Panther is already worth the hype.

Arriving in time for T’Challa’s screen debut in Captain America: Civil War, this will be many people’s introduction to T’Challa and Wakanda—or their introduction to comics, period. So while the story opens in the middle of an ongoing crisis, it’s not a continuity-heavy narrative. Longtime fans will spot undercurrents of previous Black Panther storylines like Jonathan Hickman’s New Avengers, but it’s all perfectly accessible to new readers. The prologue is so clean (and blessedly light on exposition) that it might as well be the first time we ever set foot in Wakanda.

Wakanda has always been a gift to artists, and Stelfreeze offers one of the most thoughtfully designed interpretations to date. The country’s Golden City was once an Afrofuturist paradise, but its sleek new buildings are now a reminder of how recently Wakanda was forced to rebuild after devastation by flood and war. Stelfreeze describes Wakanda as “one of the biggest characters” in the series, and his clarity of design—colored with cyberpunk flare by Laura Martin—is a vital companion to Coates’ exploration of the nation’s politics. 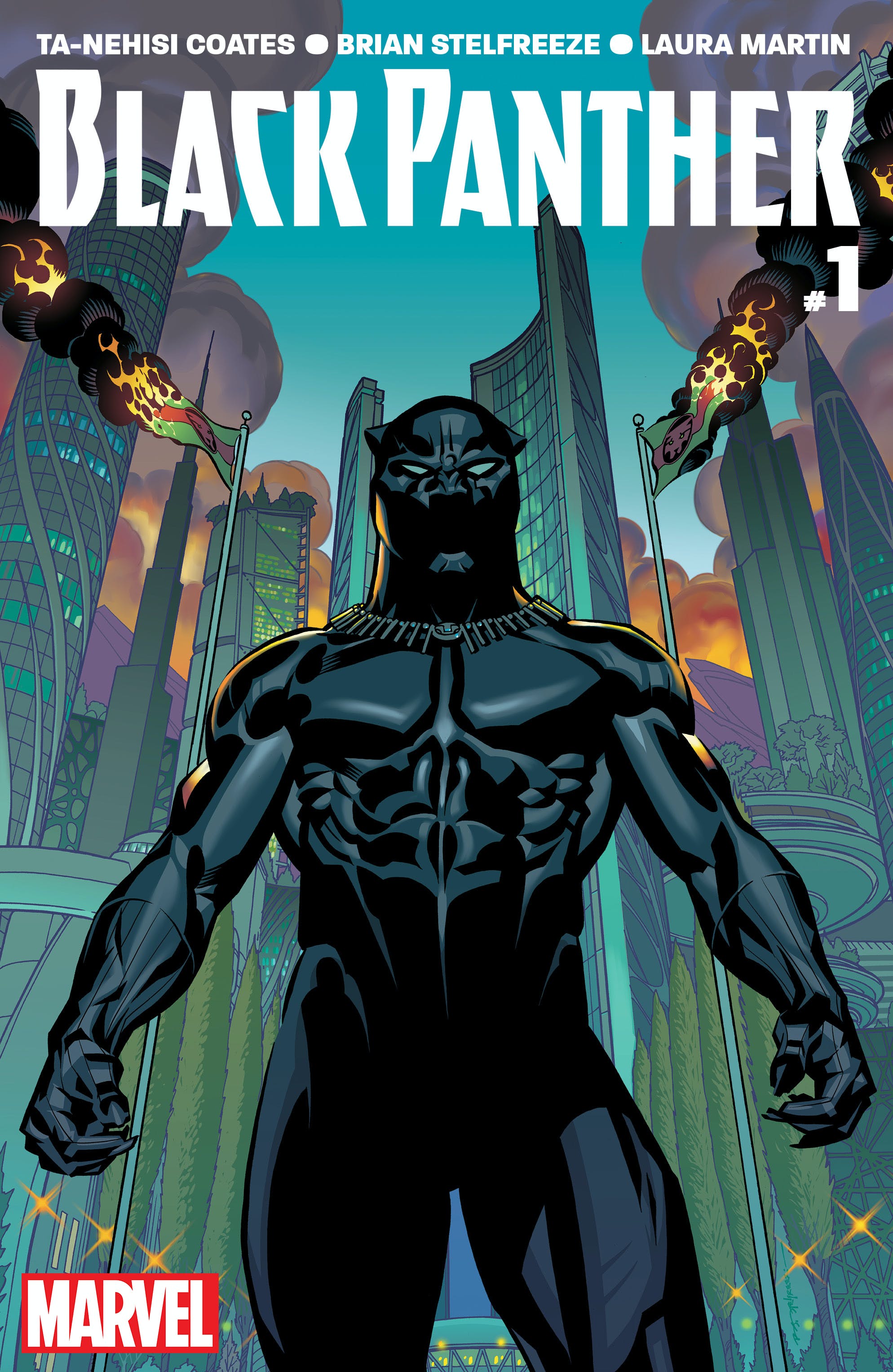 Delving deep into Wakandan culture, fans of previous Black Panther comics will be excited to see which strands Coates decided to explore. In particular, he brings the Dora Milaje into the foreground.

The Dora Milaje are the Black Panther’s all-female army of personal bodyguards, always depicted as intimidatingly badass, yet without much examination of the potentially creepy subtext of their role. There’s just something offputting about a king being accompanied everywhere by scantily-clad young women, especially when they’re sometimes referred to as the king’s “wives in training.”

This is clearly something that Coates and Stelfreeze discussed at length, because instead of trying to sidestep this difficult aspect of Black Panther canon, they decided to tackle it head-on. Rather than being near-interchangeable parts of a collective whole, the Dora Milaje of Black Panther #1 are individuals with as much inner conflict about their duty as T’Challa himself. Similarly, their costumes have been reworked to counteract the bra-and-loincloth days of yore. For a creative team like this one—an accomplished nonfiction writer who is new to comics, working with an experienced but lesser-known artist—the nightmare scenario would be Coates overpowering the story with dense political writing, something he’s actually been self-deprecatingly parodying on Twitter for months. In case it wasn’t already obvious from the glowing tones of this review, that didn’t happen. Black Panther is the end result of a balanced creative process, with pared-down dialogue and impactful, stylish art. Stelfreeze brings the cool, while Coates’ dialogue feels suitably mythic and portentous: “I must now reckon with what is loose in my country. And we must now reckon with what we have done to our own blood.”

Coates and Stelfreeze’s Black Panther is truly firing on all cylinders. Feminist, visually gripping, canonically rich yet accessible to new readers, it’s celebratory of T’Challa’s importance as an African hero, without turning him or Wakanda into an ideal.

Black Panther #1 comes out on Wednesday.