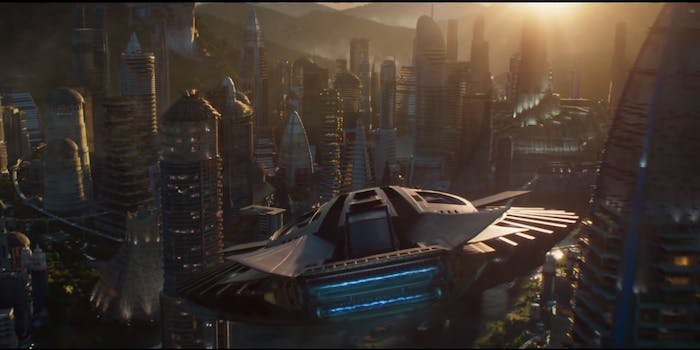 8 facts about Wakanda, the futuristic home of Marvel’s Black Panther

Here's everything you need to know before next year's Black Panther movie.

Wakanda is one of the most advanced countries in the Marvel Universe—but few people seem to have actually heard of it, let alone seen it.

Fans first got a very, very brief glimpse of Wakanda in a post-credits scene of Captain America: Civil War, but they were left with more questions than answers about the fictional African country. With King T’Challa finally hitting the big screen next February in Marvel’s highly anticipated Black Panther, it’s time for a crash course in the deep history, technology, and invaluable resources.

1. It has ancient origins

More than 10,000 years in the past, Wakanda was home to a network of ancient civilizations and small tribes. Then, one day, a giant meteor crashed in the middle of the country and started a power struggle over the rare material held inside of it. Eventually, a man named Bashenga took charge and became the first king of a united Wakanda, which is located in Northeastern Africa.

2. In some versions, Wakanda is hidden from the world

Since Bashenga’s reign, the country has become highly independent and largely detached from outside influences. In some versions of the story, the country is literally hidden behind a giant wall and no one is allowed to enter. In others, including the Marvel Cinematic Universe, it’s viewed as a “third-world country.”

3. Wakanda was only conquered once

For over 10,000 years, Wakanda remained one of the only civilizations in all of Africa, and the world, to not fall victim to the invasion of foreign powers—but that doesn’t outside forces didn’t try. That was made perfectly clear in Reginaldf Hudlin and John Romita Jr.’s run in the comic book series. Their take on the story included amazingly violent scenes from various time periods when potential conquerors tried to cross Wakandan borders with ill intent only to meet a tragic end (mostly slaughtered) by way of 1,000 flying spears or backfiring guns.

Sadly, every undefeated streak comes to an end. After centuries of fending off all outside threats, Wakanda fell victim to invasion by a horde of Skrull during Marvel’s Secret Invasion arc and was only defeated when T’Challa and his then-wife Storm worked together. After the first successful invasion in centuries, many Wakandans questioned T’Challa’s abilities as a leader.

4. Wakanda has way better tech than the U.S.

After Wakanda closing its borders to outside nations, Wakanda developed its own superior technology that’s nearly impossible to hack. If seeing the flying cars and futuristic skyscrapers Black Panther trailer isn’t enough, it should be noted that Wakanda’s worked without the use of fossil fuels and been operating in space long before the United States or the Soviet Union ever even dreamed of it.

Vibranium is one of the two strongest and rarest minerals in existence. (The other is adamantium, which is the metal that was fused with Wolverine’s skeleton.) As far as the rest of the world knows, getting your hands on a small Vibranium rock is a miracle on its own. However, Wakanda is home to an entire mountain made of it called the Great Mound.

Due to this wealth of resources, Wakanda is considered to be the most financially sound country in the entire world. Local leaders trade small amounts of it at a time for thousands of dollars and do their best to keep its full existence a secret from those who would like to take advantage of it. This helps the country have completely free education, universal healthcare, and metropolitan areas that look like they came out of The Jetsons.

6. There’s something in Wakanda’s water

While it’s surely made the country financially stable, Wakanda’s rare metals have made other aspects of life more… unpredictable. After 10,000 years of exposure, the area surrounding the meteor became susceptible to heaps of radiation from the Vibranium metals in the Great Mound. The effects of this exposure has shown itself multiple times already, including when a small group of citizens mutated but also in the plant life, including the heart-shaped herb that gives the Black Panthers of old and new their superhuman abilities after consumption.

While Wakanda is lightyears ahead of other countries, citizens still hold the methodologies and teachings of the past in high regard. It’s not uncommon for the royal family to seek counsel from college professors and witch doctors to offer solutions to the same problem, As you can likely imagine, this often leads to a clashing of the minds with different ideologies contradicting each other. This is a primary reason that Wakanda hasn’t gone completely without conflict. The outside world may have only recently started giving the nation issues, but conflicts within its borders are far from a new occurrence.

8. Black Panther has his own all-female personal security

“Move or you will be moved.” That was one of the best lines in Captain America: Civil War as T’Challa’s personal body guard was ready to throw hands with Black Widow. Well, what a lot of people may not have caught at the time is that that badass woman is part of a larger group of equally badass women called the Dora Milaje, the Black Panther’s all-female personal security detail. Imagine how capable you have to be to be security for a superhero!

We’ll get a much closer look at the Dora Milaje in Black Panther with the help of Lupita Nyong’o Danai Gurira, who will portray two members of the highly trained organization, and Florence Kasumba will return to hopefully back up her threats for our personal enjoyment. (For more background information, feel free to read World of Wakanda by Roxanne Gay.)