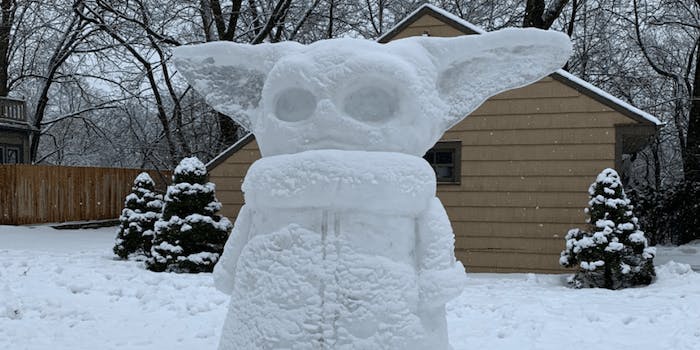 To everyone’s delight, ‘Baby Snowda’ snowmen are popping up everywhere

Pictures of what has been dubbed “Baby Snowda” are now appearing all over on social media.

The Weather Network, a Canadian news source for weather forecasts, is even urging users to share their Baby Snowda creations on Twitter alongside the hashtags #ShareYourWeather, #BabyYoda, and #Snowda.

Fans of the lovable creature, which debuted on the Disney+ series The Mandalorian, have created a wide array of Baby Snowda snowmen, ranging from the simplistic to the complex.

The Minnesota State Fair undoubtedly produced one of the most impressive designs.

Have you stopped by the fairgrounds to check out Vulcan Snow Park and the snow sculptures yet? Don’t miss this and other @StPaulWinter Carnival activities happening through Feb. 2. pic.twitter.com/cNpHwtZjug

Some even clothed their snowmen and used green dye for added effect.

Tons of Baby Yoda’s younger fans got in on the action as well.

Many of the Baby Snowda snowmen were pretty big, as you’d expect with a snowman.

But given Baby Yoda’s small stature, many opted to build snowmen that could be carried.

And it’s not just front yards where you’ll see Baby Snowda. The little guy can even be found hanging out on park benches.

The phenomenon proves that you seemingly can’t go anywhere without seeing Baby Yoda, but you won’t catch anyone complaining anytime soon.

With season 2 of Mandalorian not set to drop until this fall, the fandom gladly welcomes any and all Baby Yoda content.