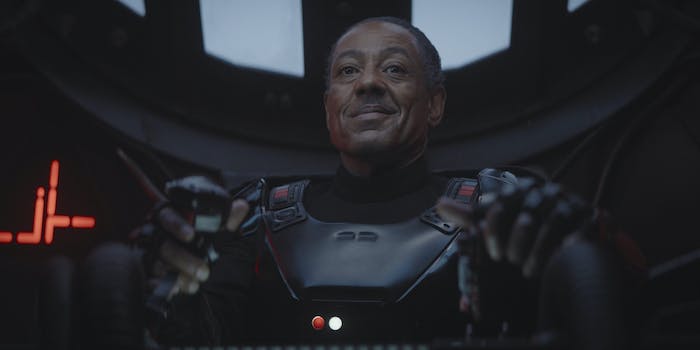 ‘The Mandalorian’ unveils even more secrets in season 1 finale

it's a shocking finale that 'Star Wars' heads will immediately recognize. And dread.

A lightsaber igniting in a Star Wars can be akin to a mic drop, especially if it happens in a story where mentions of the Force and the Jedi are few and far between. We saw it with Darth Vader’s attack on Admiral Raddus’ disabled ship, the Profundity, at the end of Rogue One. Maul, revealed to be the crime boss that Dryden Vos reported to, ignited his double-bladed lightsaber to intimidate Qi’ra, the new head of Crimson Dawn, toward the end of Solo. Even the initial reveal of Kylo Ren’s unstable cross saber igniting in the first teaser trailer for The Force Awakens was a bit of a shock.

The final shot of “Redemption,” the season finale of The Mandalorian’s first season, is its own mic drop, one meant to work no matter how much Star Wars you’ve consumed. For casual fans, the emergence of Moff Gideon from the wreckage of his TIE fighter while holding a black lightsaber is enough on its own to spell doom for the Mandalorian, Baby Yoda, Cara Dune, and Greef Carga. It was only the icing of a finale jam-packed with revelations and unmaskings as Gideon showed both his cards and the depth of his reach.

But fans of Star Wars: The Clone Wars and Star Wars Rebels (which are both streaming on Disney+, for those looking for TV shows to fill the Baby Yoda-sized hole in their heart now that The Mandalorian is on hiatus) have an additional level of dread. Because the people who’ve watched either of those shows know exactly what weapon Gideon is wielding—and what it likely means now that he has it. It’s the Darksaber, a legendary lightsaber with deep ties to Mandalore, and one far older and storied than Anakin Skywalker’s revered lightsaber.

“Legend tells that it was created over a thousand years ago by Tarre Vizsla, the first Mandalorian ever inducted into the Jedi Order. After his passing, the Jedi kept the saber in their temple. That was until members of House Vizsla snuck in and liberated it. They used the saber to unify the people and strike down those who would oppose them. One time, they ruled all of Mandalore wielding this blade. This saber is an important symbol to that house and respected by the other clans.”

Throughout Clone Wars and Rebels, the Darksaber passed hands from Death Watch to Maul after he killed Death Watch leader Pre Vizsla. It eventually ended up on Maul’s home planet of Dathomir, where Sabine Wren stole it and reluctantly learned to wield it before giving it to Bo-Katan Kryze, who would use it as a symbol to unite all of Mandalore against the Empire. For Mandalorians, the Darksaber was less about the Jedi—who the Mandalorians have seen as an enemy, as the Armorer explained to Mando (whose name is revealed to be Din Djarin by Moff Gideon), Cara, and Carga—and more about Mandalore itself.

We never learn the end result of Mandalore’s rebellion against the Empire, although, given what we know about the Mandalorians in hiding and in exile, it’s probably not good, even if the Empire is only a shadow of what it once was.

Moff Gideon, who was an ISB Officer during the purge and was supposedly executed for war crimes, holds the Darksaber that Bo-Katan Kryze once wielded; he also namechecks the Siege of Mandalore, one of the final battles of the Clone Wars. While Bo-Katan’s fate is currently unknown, it doesn’t look good for the fierce Mandalorian warrior. But what might be even more powerful is Gideon’s knowledge.

He not only knows Din Djarin’s name, something that’s only listed on Mandalore, he knows exactly who Carasynthia Dune, who survived the destruction of Alderaan (and helps give context to her particular hatred of the Empire), is. And he’s got another weapon that both of them are more than familiar with called an E-Web heavy repeating blaster, which wiped out Cara’s fellow soldiers and played a vital role in a massacre called the Night of a Thousand Tears.

By the time that Gideon threatens them with high-powered weapons, things are starting to look dire.

“Redemption” picks up where we left off from “The Reckoning” with a few moments of levity courtesy of Jason Sudeikis and Adam Pally as the two storm troopers who kidnapped Baby Yoda and director Taika Waititi behind the camera. The storm troopers, waiting for confirmation they could move onward, shoot the shit a little bit. They showcase they can’t shoot accurately to save their life and hit Baby Yoda whenever he starts making noise. But we don’t have to wait long for IG-11 to show up and take them out because they’re interfering with his primary objective to protect Baby Yoda. With a speeder on hand, they make their way to town.

And good thing they do, too. With the E-Web being set up and more troopers ready to attack, Din, Cara, and Carga look ready to negotiate, even though Gideon readily admits that he might betray them at any moment. But with IG-11’s own blasters and Baby Yoda using the Force to reverse a fire blast, they’ve got a chance. Well, except for Din, who received heavy damage from Gideon and the storm troopers and chooses to accept death rather than remove his helmet so Cara and Carga can look at his wounds; they order IG-11 to stay with Din instead as they take Baby Yoda into the sewers.

Even though Din reveals he was a Foundling (basically, an orphan) adopted by the Mandalorians who saved him from the droid attack that killed his parents; Mandalorian isn’t a race, it’s a creed, Din explains to Cara and Carga. When he came of age, he was sworn to the creed, put on a helmet so that no other living thing could look at his face again, and left his name behind. But, as IG-11 reminds Din, he is not a living thing. And so we finally get the Mandalorian unmasked.

And it’s… basically a bloodied Pedro Pascal. If you were expecting something strange, you might be disappointed, but otherwise, Pascal’s face is a welcome sight, even if it’s only so that IG-11 can apply some bacta spray to his head. (And before episode’s end, IG-11 self-destructs after walking through lava to take out a battalion of stormtroopers, so it’s not like IG-11 can tell anyone about it.)

They get to the Armorer, the only Mandalorian left in the concave after flying to Din’s rescue in Chapter 3, who asks if Baby Yoda was worth risking everything for. The sewers are full of Mandalorian armor that belonged to their tribe, some of whom probably escaped off-world after Gideon and his troopers arrived. And although the Armorer recognizes that Baby Yoda has the power of the Jedi that were once their enemies, Din is now duty-bound to protect him.

Under the Mandalorian Creed, Baby Yoda is now a Foundling that the Mandalorian will protect and train until he comes of age—whatever age that is for those of Yoda’s species—or he reunites Baby Yoda with his own kind. So all of those memes and headcanons about the Mandalorian being Baby Yoda’s dad? That just became canon.

It leaves us in a curious position at the end of season 1.

Cara and Carga stay on Nevarro with Carga offering Cara a position in the Guild; Cara considers it but mentions that she needs him to take care of her chain code that links to her past. Din destroys Gideon’s TIE fighter with explosives and the aid of his own jetpack, and then he and Baby Yoda leave the planet. The latter has a necklace with a metal Mythosaur skull on it, which once belonged to Din, marking a symbol of the Mandalorian tribe. Din, who now has a signet on his arm to indicate the newly formed Clan of Two, has the option to train him or try to find his home. And in the distance, Gideon reveals his weapon, an even more deadly foe than before.