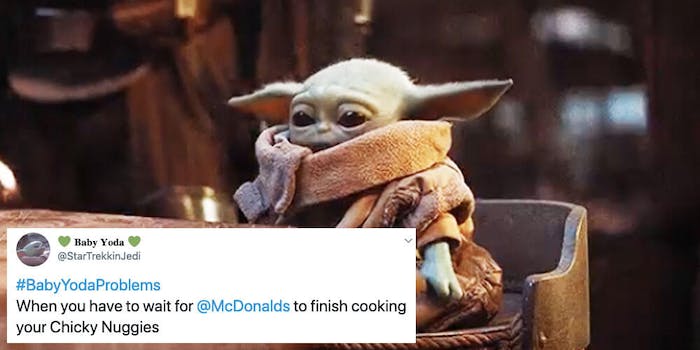 This hashtag proves that even Baby Yoda has problems

It’s not easy being green, so the saying goes. And apparently that goes for Kermit the Frog, the planet earth—in a depressing, advancing climate change kind of way—and even Baby Yoda, the breakout star of the popular Disney+ series, The Mandalorian.

It’s this that we have to thank for the recent “Baby Yoda Problems” Twitter hashtag.

Even in the eight-episode first season of the Star Wars spinoff alone, Baby Yoda has already seen his fair share of shit. I mean, at just 50 years old the poor kid has already had a bounty on his head, made some friends whom he was almost immediately forced to abandon, was kidnapped, and—spoiler alert!—even got punched by Jason freaking Sudeikis, of all people.

And yet, even then, those barely scratch the surface when it comes to the myriad of Baby Yoda problems the Child has to deal with.

For instance, you may have noticed that Baby Yoda is very “smol,” as they say in online speak. Being short comes not without its own set of complications, as those of us who are vertically challenged can certainly attest to. This is part of the reason why #BabyYodaProblems began trending on Twitter this week—as everything is inherently more difficult when you’re just three apples high.

“The other side of the room is 3 hours away #BabyYodaProblems,” Twitter user @rawbeancoal wrote, along with a GIF of Baby Yoda waddling.

#BabyYodaProblems
When you need a hug, and everyone is 5 feet taller than you are pic.twitter.com/ii4ZXtI18S

Others imagined somewhat more relatable Baby Yoda problems that aren’t exclusive to height—such as waiting for the chicken nuggets to be ready, wanting to play with the stick, and when pureed frogs just aren’t as good as fresh. (OK, we did say “somewhat.”)

“#BabyYodaProblems When you have to wait for @McDonalds to finish cooking your Chicky Nuggies,” Twitter user @StarTrekkinJedi wrote, along with a GIF of Baby Yoda sitting at a table.

#BabyYodaProblems
When you have to wait for @McDonalds to finish cooking your Chicky Nuggies pic.twitter.com/jIZ7cBC1b9

Another posted a meme of a teary-eyed Baby Yoda tucked into bed.

“When someone insults you and you stay up all night thinking about how you should have responded #BabyYodaProblems,” Twitter user @mrjafri wrote.

When someone insults you and you stay up all night thinking about how you should have responded #BabyYodaProblems pic.twitter.com/k7yfbaPTuZ

Or when a cat will not come to you. (To be fair, most cats would probably nope the heck out at the sight of a Baby Yoda.)

“#BabyYodaProblems Cats still don’t care about how cute I am,” Twitter user @Radstags wrote, along with a meme of Baby Yoda failing to lure a cat in by making a “psstpsstpsst” noise.

#BabyYodaProblems
Cats still don't care about how cute I am. pic.twitter.com/kOERuFq0PS

And of course, there was the inevitable mashup of Baby Yoda and other memes, such as the “woman yelling at the cat” meme and “Please Don’t Break the Window” meme.

#BabyYodaProblems
Baby Yoda doing a safety video about leaving your pets in a car pic.twitter.com/g7WWnySx6I

As yet another popular saying goes, I’ve got 99 Baby Yoda problems, but suffocating to death in a hot car ain’t one.