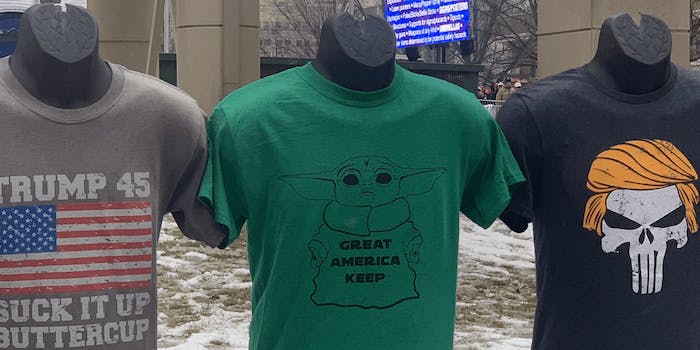 A T-shirt featuring the 'Star Wars' character was spotted at a Trump rally in Milwaukee.

Supporters of President Donald Trump are attempting to cash in on Baby Yoda by using the beloved creature to hawk merch.

The green shirt, which features the breakout star from the Disney+ hit series The Mandalorian, includes the Yoda-like interpretation of the rally’s name: “Great America Keep.”

Despite Baby Yoda’s unmatched popularity online, Steakin noted that the shirt, which he stressed was not connected to the Trump campaign, was apparently selling poorly.

“FWIW the vender [sic] said it’s ‘not selling as good as I thought it would,'” Steakin said.

FWIW the vender said it’s “not selling as good as I thought it would.”

People online were not happy to see the politicization of Baby Yoda, who has become a rare beacon of joy for many in our polarized country.

“Do they know he doesn’t speak,” Twitter user @thedavidrindexp asked.

do they know he doesn't speak

Why is someone always trying to destroy my perpetual childhood?

Well he went to the dark side fast.

Others merely tagged Disney in an apparent attempt to have the shirt banished for copyright infringement.

They can't help but steal intellectual properties. @DisneyStudios probably doesn't like their characters being used on unlicensed garbage.

While it could be the shirt’s less-than-impressive design, it appears Trump supporters just aren’t that into Baby Yoda. But this doesn’t mean that the president’s adherents aren’t into fictional characters. They still have QAnon, after all.

Disney thus far has not weighed in publicly on the shirt, which is similar to thousands of other bootleg Baby Yoda items that have popped up online in the last few months.