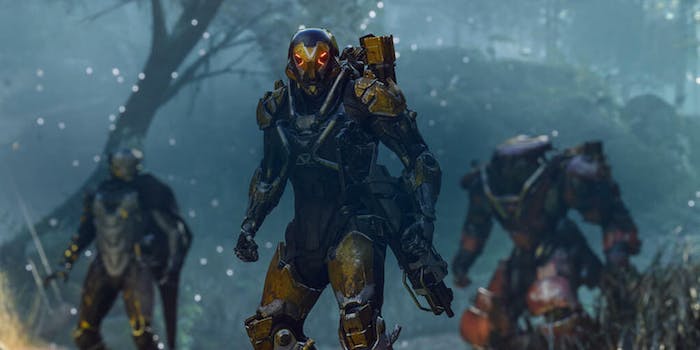 Pressure mounts as Anthem reportedly gets delayed to 2019

BioWare is reportedly pulling developers off the next Dragon Age to finish up Anthem.

When Electronic Arts and BioWare first revealed the blockbuster game Anthem in June of last year, they said it would come out in fall of 2018. But according to a source who spoke recently with Kotaku, that date was “never realistic.” EA hasn’t confirmed the delay, but multiple sources familiar with the project say it will launch sometime in the first quarter of 2019.

If you’re familiar with modern AAA games, this should come as no surprise. Big games often get delayed, particularly if they have prominent online features. Like Destiny, Anthem is a “shared-world” shooter, which means you’ll fight alongside other players who happen to be in the same in-game location when you are.

But the delay is a bummer for anyone who was hoping to play it this year. And judging by gaming forums and social media, Anthem is about as highly anticipated as games get.

For one thing, it’s being made by the team responsible for the original Mass Effect trilogy, which amassed many fans last console generation. For another, it’s aiming to be a shooter you can play endlessly, like Destiny 2 or The Division. And with so many people disappointed by Destiny 2’s endgame, many players will surely flock to Anthem to see if it’s more appealing in the long run.

Even getting Anthem out by the end of March 2019 may be a struggle. Kotaku reports BioWare is going all-in on the game, pulling developers off other projects like the next Dragon Age to help get it out the door on time. There’s apparently little wiggle room with Anthem’s release because EA’s financial year closes at the end of March. Pushing it past March 2019 could spell bad news for EA’s stock price.

Anthem is obviously an important game in EA’s portfolio. Between the lackluster reception of last year’s Mass Effect Andromeda and the loot box controversy in Star Wars Battlefront 2, Anthem is sure to face extra scrutiny. But if any studio can deliver under pressure, it’s probably BioWare.