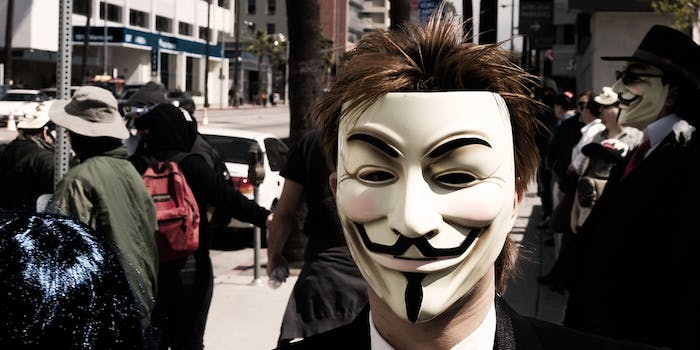 Anonymous is winning its Craigslist battle against Scientology

The hacker collective has ruined the Church of Scientology's Craigslist recruiting efforts.

Anonymous’ campaign against Church of Scientology recruiting attempts on Craigslist is a success, a member of the hacking collective told the Daily Dot.

The Church of Scientology reportedly posted between 100 and 200 Craigslist ads a day in a number of major metropolitan areas to attract recruits to the group, which many consider a cult. The ads, Anonymous maintains, broke Craigslist’s Terms of Service.

Anonymous posted a legion of counter-ads to focus attention on this breach, and the action seems to have been successful.

“Even though there has never been any public response from Craigslist, the tables have turned,” an Anonymous representative told the Daily Dot in an email.

“Within a day of stories breaking, our flagging seemed to be recognized. Church accounts appear to have been banned in a number of cities, and in larger cities where hundreds of ads were posted daily (such as New York City and San Francisco), all have been knocked down to pretty minimal amounts, which we can usually flag away with general ease,” the source reported.

Anonymous’ success hasn’t entirely stopped the recruiting effort, though, and it seems to have angered Church of Scientology higher-ups.

Anonymous shared a letter it claimed to have received from a former Scientologist, which purports to give a glimpse inside the church’s reaction to the Anonymous campaign. They asked the Daily Dot to not quote the letter directly because “(t)hey still have family in the cult and if they are found to be the source of any information, they will force disconnection and they will never be able to speak to this person again.”

The author of the letter also informed Anonymous that several Scientology representatives have contacted Craigslist in an attempt to block the counter-ads as hate speech, a charge Anonymous denies.

“(M)any of our counter-posts distinctly say that we don’t hate Scientologists,” said the same Anonymous source, “just that we cannot tolerate an organization that perpetrates various human rights abuses and bilks people out of their hard-earned money for access to so-called religious doctrine and to fund a vast real estate empire, and isolates its members from the rest of the world.”

A new development seems to be a crude phishing email targeting those posting counters to the Scientology ads on Craigslist:

Nice writing to you, a few minutes ago I read your post on craigslist and it attracted me, right now I have some work need you if you have time,

for the details please read [link] which I post with descriptions.

If you have any questions feel free to shoot me an email.

It is worth noting that Jenna Miscavige Hill is a well-known critic of Scientology and the niece of David Miscavige, the church’s current leader. This could be a coincidence, but Anonymous believes it’s evidence of a Scientology connection.

“We cannot confirm that the Church of Scientology is on the other end of this, but find it highly suspect given the name provided in the e-mail,” Anonymous said.

The Church of Scientology did not respond to a request for comment.