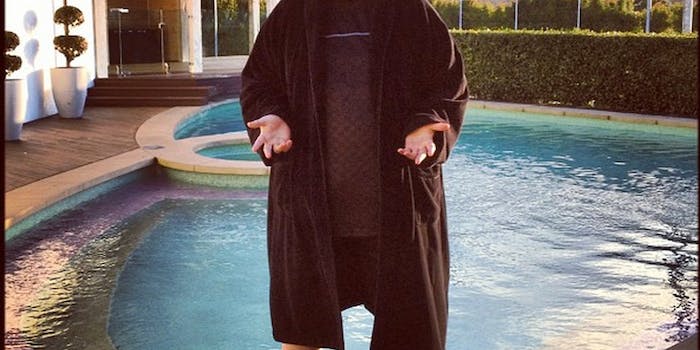 The Megaupload founder says his prosecution is an MPAA hitjob, and tells Hollywood "the Internet is stronger than you."

Embattled, extravagant Internet tycoon Kim Dotcom has a message for Hollywood: The Internet is stronger than you.

In an open letter posted to The Hollywood Reporter Wednesday, Dotcom told Hollywood executives that their efforts to thwart cyberlocker sites like Megaupload are counterintuitive to the advance of technology and information sharing.

“The Internet frightens you,” he wrote. “But history has taught us that the greatest innovations were built on rejections. The VCR frightened you, but it ended up making billions of dollars in video sales.”

Dotcom argued that “The law of human nature is to communicate more efficiently” and that “the benefits of Megaupload”—benefits like high speed file sharing, unlimited cloud storage—”outweigh the burdens.”

“Businesses and individuals will keep looking for faster connectivity, more robust online storage anymore privacy,” he wrote. “But instead of adapting, you important one of your action-conspiracy movie scripts into the real world.

“In my view, MPAA CEO and former Sen. Chris Dodd lobbied his friends in the White House to turn me into a villain who has to be destroyed. Due process? Rule of law? Eliminate me and my innovation and worry about the consequences later.”

Dodd, a former Connecticut Senator who now lobbies for the Motion Picture Association of America, was quoted in May concerning his intentions to institute a new copyright bill on the MPAA’s behalf, one that would effectively serve as a second iteration of SOPA, in January 2013.

“The people of the Internet will unite,” Dotcom wrote. “They will help me. And they are stronger than you. We will prevail in the war for Internet freedom and innovation that you have launched. We have logic, human nature and the invisible hand on our side.”

Dotcom now seeks a meeting with Hollywood executives to explain the ways in which “our Mega services operated within the boundaries of the law” and point both parties in a solution-minded direction.

“Regardless of the issues you have with new technologies, you can’t just engage armed forces halfway around the world, rip a peaceful man from his family, throw him in jail, terminate his business without a trial, take everything he owns without a hearing, deprive him of a fair chance to defend himself and do all that while your propaganda machine is destroying him in the media,” he wrote.

Dotcom closed by extending his open ear to those who have rallied against him and his site.

“Just call me or my lawyers,” he wrote. “You know where to find me. Unfortunately I can only do lunch in New Zealand.”