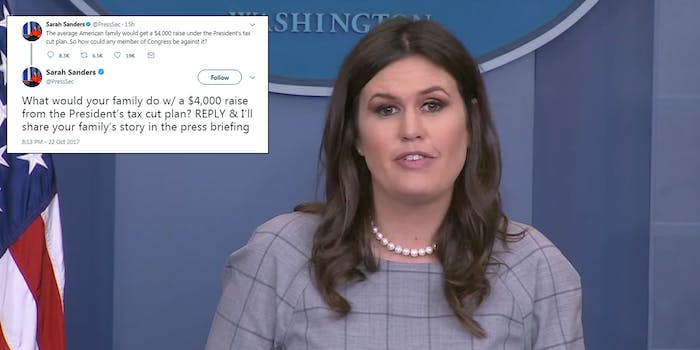 She should have seen this coming.

White House Press Secretary Sarah Huckabee Sanders on Sunday asked Twitter users what they would do with money President Donald Trump’s administration believes the “average” American family would save under his tax plan–and the responses were brutal.

“The average American family would get a $4,000 raise under the President’s tax cut plan. So how could any member of Congress be against it?” Sanders wrote in a series of tweets. “What would your family do w/ a $4,000 raise from the President’s tax cut plan? REPLY & I’ll share your family’s story in the press briefing. Do you stand w/ the Democrats for higher taxes & bigger government? Or w/ @POTUS for lower taxes & thousands more $$$ in take home pay?”

What would your family do w/ a $4,000 raise from the President’s tax cut plan? REPLY & I’ll share your family’s story in the press briefing

Some people were quick to point out that the suggestion that every “average American family” would be receiving $4,000 was misleading. According to the nonpartisan Tax Policy Center, cutting the corporate tax rate from 35 percent to 20 percent would mostly help people who made at least $465,626 annually.

But other people played along with the idea that a magical $4,000 check would land in their laps. As one Twitter user put it, “this isn’t gonna go well for you, Sarah.”

I’d buy a unicorn, since that’s about as real as the $4,000 raise you keep lying about https://t.co/DnPwJwkUfR

I would donate it you, in hopes that it would be enough to buy your soul back from the devil. https://t.co/asxtzxuI7e

Buy a lie detector test and put your entire administration through it https://t.co/uMVXCyCYKy

What any other right minded individual would do, add it to @ImLarryFlynt $10M reward for information leading to @realDonaldTrump impeachment https://t.co/0V7XlGYoeb

Somehow, it doesn’t seem likely Sanders will be sharing any of those ideas during the next press briefing.