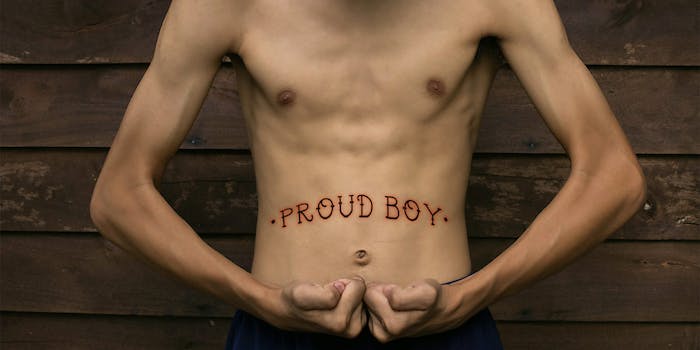 Meet the Proud Boys, the pro-men, anti-masturbation enemy of ‘antifa’

For some, it's an edgy fraternity. For others, it's a recruiting ground for white nationalists.

The white supremacist “alt-right” and the arguably indistinguishable “alt-lite” comprise a fractured and uneasy coalition of various groups bridging the ultra-conservative mainstream fringe with the far-right. It can often be difficult to tell where memetic irony ends and the dangerous sincerity of white supremacy begins.

No more is this the case than with the “Proud Boys,” the self-described “pro-West fraternal organization” for men who “refuse to apologize for creating the modern world.” You may have seen the name on Reddit or written on the apparel of a man on the street or proudly worn by your female elected representative. Here’s what we know about the Proud Boys.

Who are the Proud Boys, and what do they stand for?

Proud Boys was founded in 2016 during President Donald Trump’s election campaign by Gavin McInnes, Vice Media co-founder-turned-right-wing provocateur. McInnes runs a number of online media shows and has become a controversial personality whose brand of political incorrectness often results in him being accused of sexism or anti-Semitism.

McInnes, who was a contributor at Ezra Levant’s Rebel Media, has regularly received praise from those associated with the more insidious and outright white supremacist right-wing fringe for his most outlandish and controversial statements and outrage-baiting content—compliments that McInnes has often angrily thrown back in curse-filled tweets.

Still, while McInnes has often denied the Proud Boys’ suggested affiliation with the far right and vocally disavowed white supremacist marches, he has debated and played host to white nationalists like Richard Spencer on his Rebel Media show.

Until February 2017, McInnes was also an active contributor to Fox News before he announced he was disassociating from the network. He severed ties with Vice in 2008.

What do the Proud Boys believe?

According to McInnes, there is one fundamental tenet of the organization: upholding “western chauvinism.” As such, the Proud Boys exist almost as a reprise of the Men’s Rights Movement and an expression of neo-masculine traditions and toxic masculinity. Proud Boys say they want to “venerate the housewife” and return to the gender roles of the early 20th century.

The Proud Boy Facebook group, which has amassed over 20,000 followers, stipulates values that also include being pro-life, advocating for free speech as well as drug legalization, gay rights, and the Trump administration. The group also claims to stand against Islam, Nazism, and feminism. As of September 2017, the group’s page prominently displays a banner reading “proud boys are not alt-right.” The banner also appears on the official Proud Boys website.

McInnes, however, rejects that the group is racist or homophobic—a view of the organization asserted by several media outlets. Non-white and gay members are welcome, although they must adhere to the belief that “white men are not the problem.”

Where did the name come from?

The organization’s name was actually adopted from a song that, while cut from the original 1992 movie, featured in the 2011 Disney stage show version of Aladdin. In the song, titled “Proud of Your Boy,” the character of Aladdin seeks his mother’s forgiveness for his misbehavior.

McInnes claims to have first heard the song at a school’s talent show in late 2015 and made a running joke of the character’s apologetic self-contempt on his podcast. The fraternity’s name spawned from an ironic take on the song name.

How are new members initiated into the Proud Boys?

The fourth and final degree was added much later by McInnes and is a clear step away from the prankishness of the other rites. It hints at the right-wing bent that the hyperpartisan culture in Trump’s America has served to amplify. The fourth initiation requires that a prospective Proud Boy serve the “cause,” as McInnes suggested, by engaging in a physical brawl with members of “antifa,” the loose-knit far-left and anarchist anti-fascist movement.

Are the Proud Boys known to have engaged in violence?

The Proud Boys have made headlines on several occasions since Trump’s inauguration. Members of the group had a minor scuffle with anti-fascist protesters when McInnes delivered an impromptu speech at New York University in February. On July 1, several self-proclaimed Proud Boys disrupted a protest in Halifax, Nova Scotia, organized by indigenous activists groups. Five of the Proud Boys members were enlisted in the Canadian Armed Forces, and the Royal Canadian Navy launched an investigation into the incident. The men were temporarily relieved of their normal duties, but the Navy ultimately brought no charges against them. Four of the servicemen returned to their regular duties in late August on a probationary status, while the fifth left the Forces.

Perhaps the most significant confrontation that the Proud Boys have had was during the second bout of protests at University of California, Berkeley, in March. While participating in a pro-Trump march on the campus, Kyle Chapman was filmed hitting anti-fascist protesters with a stick—an assault for which he was subsequently arrested.

Promptly dubbed the “Based Stickman,” Chapman became somewhat of a meme to the Proud Boys, and they crowdfunded his bail money. He was adopted into the fraternity but has since formed a new street-fighting cell within the Proud Boy organization. It’s called Fraternal Order of the Alt-Knights, or FOAK, which Chapman describes as “tactical defensive arm” of the Proud Boys. Its members attend nationalist rallies equipped with shields and weapons, operating almost as a separate entity within the Proud Boys—and with the “full-approval” of McInnes, according to Chapman.

McInnes was explicit in his insistence that group does not inflict violence on others as a confrontational tactic but rather FOAK only responds defensively to attacks from antifa activists or black bloc protesters.

The new violent subset of the Proud Boys in a reactionary like Chapman signifies that the organization is flirting increasingly with the extreme right’s confrontational activist frontline, away from political incorrectness, breakfast cereal-themed beatings, and the in-joke shenanigans of McInnes’ fraternity. After the right-wing “Unite the Right” rally in Charlottesville, Virginia, on Aug. 12, that needed to be addressed.

Confrontation with the far left reached a dangerous new precedent in Charlottesville when violence culminated in the death of a 32-year-old woman, Heather Heyer, when an alleged member of a white supremacist march drove his car through a crowd of counterprotesters. Twenty others were also injured in the apparent attack.

It soon emerged that the event’s planner, Jason Kessler, had joined the Proud Boys. McInnes, who had publicly criticized the white supremacist rally two months earlier, explained that he had kicked Kessler out of the fraternity as soon as his racist views had become apparent. He then published a detailed article in the Proud Boys magazine explaining that the organization was not “alt-right” and that the Proud Boys were not in attendance at the rally.

“Proud Boys may not attend alt-right events in ANY capacity… It’s very simple. We are a men’s club that meets about once a month to drink beer,” McInnes explained on the Proud Boys website.

We have attended rallies where we felt our friends were in danger but that’s not what we’re about. We’re not political activists. FOAK (which isn’t alt-right either) is very active and political and they are affiliated with us in the sense that they have our backs in a riot. If you want to attend every single patriot rally, join FOAK. We don’t want to go to riots. We want to drink beer.

It’s a standard, however, that McInnes cannot possibly uphold or enforce as the organization grows beyond him. Indeed, rather menacingly, a Proud Boys magazine article announcing the launch of FOAK mused that “at this point, the Proud Boys has grown beyond McInnes’ control.”

Despite the repeated condemnation of the “alt-right” and defense of the Proud Boys by McInnes, a report by the Southern Poverty Law Centre concluded that some members “appear to be following paths into hate groups after a gestation period in McInnes’ group.”

The report traces the radicalization of several Proud Boys through social media posts—including one from his ascent to Proud Boys membership to his purchase of Adolf Hitler’s Mein Kampf. The report argues that the Proud Boys fraternity serves as a “recruiting ground for white nationalists and anti-Semites” that not only delights but benefits the leaders of the “alt-right.”

Correction: An earlier version of this article misstated action taken against five Proud Boys members in Halifax, Nova Scotia. Although the Royal Canadian Navy launched an investigation into the incident, the Proud Boys attorney says no members were arrested.