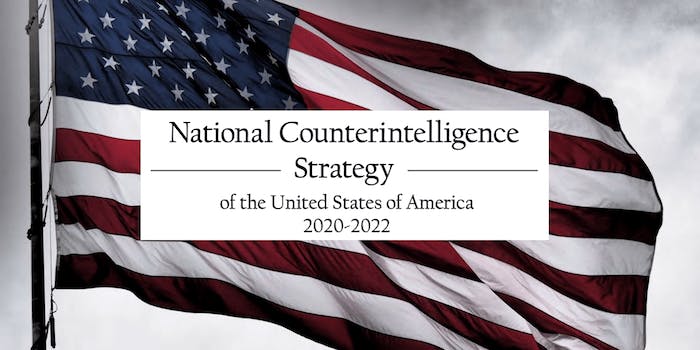 A new report from the U.S. government warns that a growing number of foreign adversaries are using digital means to undermine American interests.

The document, released by the National Counterintelligence and Security Center (NCSC) on Monday, outlines the intelligence community’s strategy for dealing with those threats.

“The Nation faces an expanding array of foreign intelligence threats by adversaries who are using increasingly sophisticated methods to harm the United States,” the document states.

The report specifically points to countries such as Russia, China, Cuba, Iran, and North Korea as posing the most significant threat. Non-state actors including Hezbollah, ISIS, and al-Qaeda as well as groups motivated by crime and ideology are said to pose “significant threats” as well.

Burgeoning technologies such as artificial intelligence and the “Internet of Things” also make the United States more vulnerable given its widespread reliance on internet-connected devices.

NCSC Director William Evanina argues that foreign adversaries are no longer just focused primarily on U.S. intelligence agencies, but on the public and private sector as well.

“With the private sector and democratic institutions increasingly under attack, this is no longer a problem the U.S. government can address alone,” Evanina said. “It requires a whole-of-society response involving the private sector, an informed American public, as well as our allies.”

The document focuses on protecting critical infrastructure, intellectual property, and democratic institutions. While China is best known for stealing American secrets, for example, Russia has focused on using misinformation and other strategies to influence public opinion.

“Foreign intelligence entities are targeting most U.S. government departments and agencies — even those without a national security mission — as well as national laboratories, the financial sector, the U.S. industrial base and other private sector and academic entities,” the report adds. “Some adversaries are conducting intelligence operations to exploit, disrupt, and damage U.S. and allied critical infrastructure and military capabilities during a crisis.”

A 2002 law states that the NCSC must produce a report at least once every three years discussing the latest threats. The last document was produced in 2015 under former President Barack Obama.