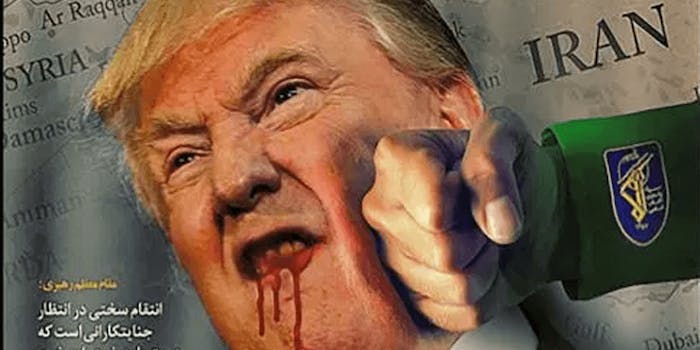 The image was plastered on the homepage of an obscure U.S. government site.

The group, which referred to itself as the “Iran Cyber Security Group Hackers,” commandeered the homepage of the Federal Depository Library Program.

A message on the site was accompanied by an image of President Donald Trump being struck by a fist while bleeding from the mouth.

The hackers further warned that the defacement was only a “small part of Iran’s cyber ability.”

Despite the group’s claims, no evidence thus far connects the incident to the Iranian government. While the hackers may be pro-Iran, experts argue that it is unlikely that the Iranian regime would target the website of a little-known U.S. government agency.

Run by the Government Publishing Office (GPO), the Federal Depository Library Program (FDLP) is responsible for making federal government documents and other data available to the public.

Gary Somerset, the chief public relations officer for the GPO, confirmed to CNN that the site was taken offline in response to the hack.

“An intrusion was detected on GPO’s FDLP website, which has been taken down,” Somerset said. “GPO’s other sites are fully operational. We are coordinating with the appropriate authorities to investigate further.”

The Department of Homeland Security has since announced an investigation into the matter.

“We are aware the website of the Federal Depository Library Program (FDLP) was defaced with pro-Iranian, anti-US messaging,” said Sara Sendek, a spokesperson for DHS’ Cybersecurity and Infrastructure Security Agency. “At this time, there is no confirmation that this was the action of Iranian state-sponsored actors. The website was taken off line and is no longer accessible. CISA is monitoring the situation with FDLP and our federal partners.”

The incident comes in the wake of the death of top Iranian general Qassem Soleimani, who was killed by a U.S. airstrike early Friday in Baghdad.