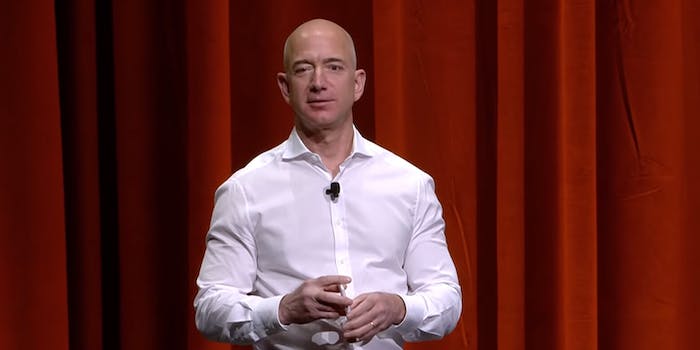 Amazon CEO Jeff Bezos’ phone was hacked in 2018 after receiving a WhatsApp message from an account linked to Saudi Crown Prince Mohammed bin Salman, according to a new report.

The Guardian reports that a digital forensic analysis found it “highly probable” that a malicious video file sent from a number used by bin Salman was responsible for hacking Bezos’ phone.

Sources told the news outlet that a large amount of data was taken from Bezos’ phone within hours of the text exchange.

The New York Times reports that the message Bezos, who is also the owner of the Washington Post, received had an image of Swedish and Saudi Arabian flags that had Arabic text over it.

A forensic analysis report does not say whether the Amazon CEO opened the video attachment, but “the amount of data exiting his phone increased almost three hundredfold,” after he received it, the Times reports.

The forensic investigation was done by FTI Consulting, a business advisory firm, on behalf of Bezos, according to the newspaper. A United Nations report released today has the same findings.

Last year, Bezos met with federal prosecutors, according to CNN, amid suggestions he made that Saudi Arabia was responsible for a National Enquirer story about an affair he had.

A security consultant for Bezos suggested in an opinion piece for the Daily Beast in March that “the Saudis had access to Bezos’ phone, and gained private information.”

The Saudi Embassy late Tuesday called reports that the country was behind the Bezos hacking were “absurd.”

“Recent media reports that suggest the Kingdom is behind a hacking of Mr. Jeff Bezos’ phone are absurd. We call for an investigation on these claims so that we can have all the facts out,” the Saudi Embassy account tweeted.

Recent media reports that suggest the Kingdom is behind a hacking of Mr. Jeff Bezos' phone are absurd. We call for an investigation on these claims so that we can have all the facts out.

However, according to the U.N. statement that was released, bin Salman may have also taunted Bezos before the news of the affair came out.

“A single photograph is texted to Mr. Bezos from the Crown Prince’s WhatsApp account, along with a sardonic caption. It is an image of a woman resembling the woman with whom Bezos is having an affair, months before the Bezos affair was known publicly,” the report found.