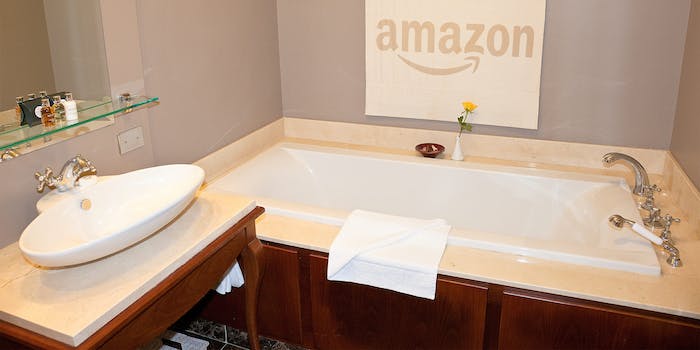 Jeff Bezos, Amazon CEO and world’s richest man, is renovating his Washington, D.C. mansion, and Washingtonian obtained and published the floor plans. The 27,000 square-foot home is impressive, but one stat in the renovation plans stood out: 25 bathrooms.

Washingtonian reports that part of the point of the home, the largest in Washington, is “A-level socializing,” so Bezos presumably won’t be using all 25 of his toilets personally. Still, many found it strange and hilarious to build more than two bathrooms for every bedroom.

WISE MAN AT SEMINAR: when you've used a toilet once, it will radiate Nega-Energy for the rest of its life
JEFF BEZOS, CONTEMPLATING: I'll need 25 hot-swappable toilets https://t.co/xyD9idhWVF

architect, winning a bet with his colleagues: now, obviously you need twice as many bathrooms as bedrooms
the richest man in the world: obviously

How the shit do you have more than a 2:1 bathroom/bedroom ration. Does Bezos have the worst UTI in history?

Jeff bezos needs 25 toilets because he has so much diarrhea that he has to sprint from one toilet to the next, leaving a trail behind him like a snail, and it takes 24 hours to clean it

imagine how much jeff bezos is going to be spending on toilet paper to keep 25 bathrooms stocked https://t.co/ToGkPbNVHQ

It’s also cruelly ironic that Bezos will have 25 bathrooms when many Amazon warehouse workers report they’re afraid to take bathroom breaks. They’ve said the bathrooms are too far away and they fear being punished for missing their performance targets. Some have even reported peeing in bottles rather than risking a long walk to a real toilet.

It almost feels like Bezos demanded a ridiculous number of bathrooms just as a big fuck you to the Amazon warehouse employees who have been pissing in bottles and denied bathroom breaks https://t.co/SjnDAWhFwx

The good news, I guess, is that Bezos will be able to reduce his toilet paper costs by using “subscribe and save” with his Amazon Prime subscription. Isn’t capitalism great?