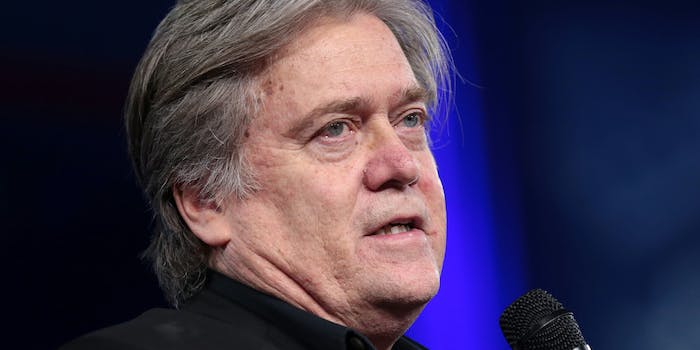 A former business partner defended Bannon's character—but noted he did not agree with his political beliefs.

White House chief counsel and former alt-right website executive Steve Bannon has “great character” and is “not a racist,” according to one of his former business partners.

Jeff Kwatinetz, who was a partner of Bannon’s in Hollywood, spoke with the Hollywood Reporter recently about the former executive chairman of Breitbart where he defended him on a wide range of issues.

In the Q&A, Kwatinetz, a self-described liberal, discussed his time at the TV production company The Firm and what it was like working with Bannon, who has written, directed, or produced more than a dozen films.

Asked about Bannon’s political leanings, Kwatinetz acknowledged that the two don’t always see eye-to-eye but that his beliefs are not “based on racism.”

“He has beliefs and stands by them,” Kwatinetz said. “Those beliefs aren’t based on racism, they’re based on what he honestly believes is best for the world. Do I agree with all of them? No. He was a [George W.] Bush and a [Donald] Rumsfeld supporter, I was a Bill Clinton and Bernie Sanders supporter. But not being a liberal doesn’t mean you’re a racist.”

Bannon might be known for his alt-right views and dislike of the media, but he also is a partial owner of syndication rights for Seinfeld and most recently released the 2016 documentary Torchbearer in which “Duck Commander” Phil Robertson travels the world’s historical sites to make the case for belief in God.

Read the rest of the interview—which includes snippets about the documentaries Bannon has made, Bannon’s time in Hollywood and whether or not Kwatinetz ever saw Bannon lose his temper —here.