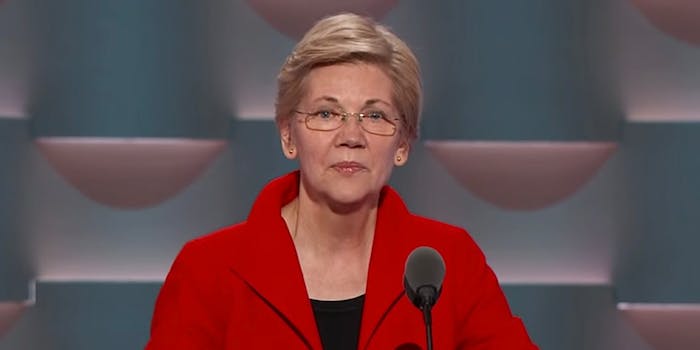 It's the new 'nevertheless, she persisted.'

Kelly wrote the email to Kevin Carroll, who at the time was his senior counselor in the Department of Homeland Security, on Feb. 8, 2017. The email came after Kelly spoke on the phone with Warren regarding the Trump administration’s travel ban.

“Absolutely most insulting conversation I have ever had with anyone,” Kelly wrote, according to BuzzFeed News. “What an impolite arrogant woman. She immediately began insulting our people accusing them of not following the court order, insulting and abusive behavior towards those covered by the pause, blah blah blah.”

BuzzFeed News acquired Kelly’s email among thousands of others following a Freedom of Information Act lawsuit.

In his response, Carroll wrote the following: “Too bad Senate Majority Leader McConnell couldn’t order her to be quiet again! Warren is running for president so early, trying too hard, and chasing bad pitches.”

The day before Kelly sent his email, Warren planned to read a letter on the Senate floor written by Coretta Scott King 1986 in opposition of Attorney General Jeff Sessions’ nomination to be a federal judge. Sen. Mitch McConnell (R-Ky.) then invoked Senate Rule XIX to stop Warren and any other senator from speaking about Sessions’ record.

McConnell said at the time of Warren, “She was warned. She was given an explanation. Nevertheless, she persisted.” #ShePersisted then exploded as a tagline representing feminism and resistance.

I am a nasty
Impolite
Arrogant woman
And I will fucking persist pic.twitter.com/uvXIb69lJ2

Any woman who questions the status quo power structure is an "impolite arrogant woman". #TimesUp

I need "Impolite Arrogant Woman" on a t-shirt. https://t.co/xStVnwYu6l