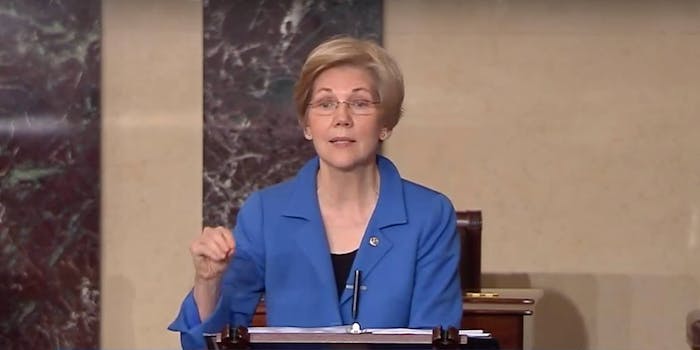 Silence Elizabeth Warren and this is what happens.

Last night, in a bid to keep Sen. Jeff Sessions from becoming the new attorney general, Sen. Elizabeth Warren read a letter Coretta Scott King wrote in 1986 against Sessions’ nomination for federal judgeship, citing Sessions’ racism and opposition to voting rights legislation. Sen. Mitch McConnell interrupted Warren and invoked Senate Rule XIX to silence her and forbid any other senator from bringing up Sessions’ record. As an explanation, McConnell said of Warren, “She was warned. She was given an explanation. Nevertheless, she persisted.”

Well, the joke’s on you, McConnell, because you just created the newest feminist slogan!

Almost immediately after news broke, #ShePersisted began trending, with women taking it as a rallying cry and posting the photos and stories of other strong women in history who’ve persisted.

What I'm going to be saying to myself every morning as I face the day, ready to work.#ShePersisted#resist pic.twitter.com/wV9VTFZ6ML

In America, we don’t silence women who persist, we celebrate them. #ShePersisted #BlackHistoryMonth pic.twitter.com/yZtTed3Eho

“She was warned. She was given an explanation. Nevertheless, #ShePersisted.” pic.twitter.com/y7ii5J0RSp

She was warned. She was given an explanation. Nevertheless, #ShePersisted

She was warned. She was given an explanation. Nevertheless, #ShePersisted#StillWithHer pic.twitter.com/Wdw5SdQpCT

Some are saying that McConnell misinterpreted Senate Rule XIX, which states that “No senator in debate shall, directly or indirectly, by any form of words impute to another senator or to other senators any conduct or motive unworthy or unbecoming a senator.” Others are pointing out that the gag rule originated to keep conversations of abolition out of the House, and that yet again it was used to silence the words of a black person.

After Sen. Warren was silenced, she—yup!—persisted, taking to Facebook Live to read King’s letter. As of this publishing, the video of her reading King’s letter has been viewed over 7.3 million times.