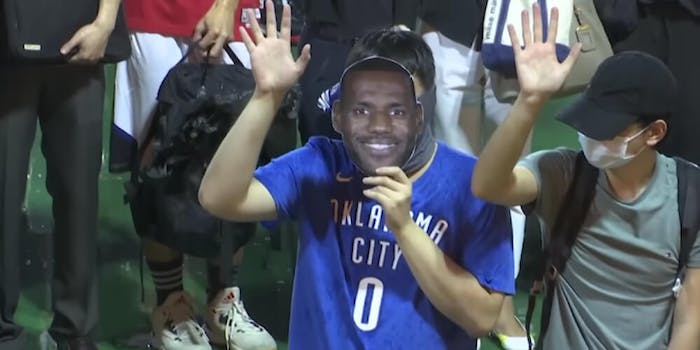 They are protesting the NBA star.

A picture is circulating on social media that claims that a Hong Kong protester wore a printed-out photograph of LeBron James, who has recently made controversial comments about China, in order to evade AI facial recognition during protests.

Chinese officials have allegedly been using facial recognition to detect and to control protesters.

Earlier this week, James called the Houston Rockets manager “misinformed” and “not educated” for tweeting in support of Hong Kong’s pro-democracy protesters.

Lakers’ LeBron James on NBA’s China controversy: “I don’t want to get into a … feud with Daryl Morey but I believe he wasn’t educated on the situation at hand and he spoke.” pic.twitter.com/KKrMNU0dKR

In response, protesters have taken aim at James, with some burning his jersey, according to NBC. Meanwhile, the protesters have also held a rally in support of general manager Daryl Morey, who has since deleted his tweet because of backlash from mainland China.

A chant from the basketball fans in Hong Kong: "F___ off James."

All together, a chant of "Thank you Morey" pic.twitter.com/MoNZeWbjPQ

“James was trying, you know, to take a side, on the China side, which is like ridiculous,” marketing director Aaron Lee told Yahoo Sports. “He was being honest, financially. Financial is money. Simple as that. LeBron James stands for money. Period.”

The picture shows a man wearing a photo of James’ face as a mask and holding a Yuan, reflecting the argument from Hong Kong protesters that James cares more about money than for human rights.

Protesters also told NBC that they viewed James as having a “double standard” because he has previously used his status to advocate for human rights in the United States.