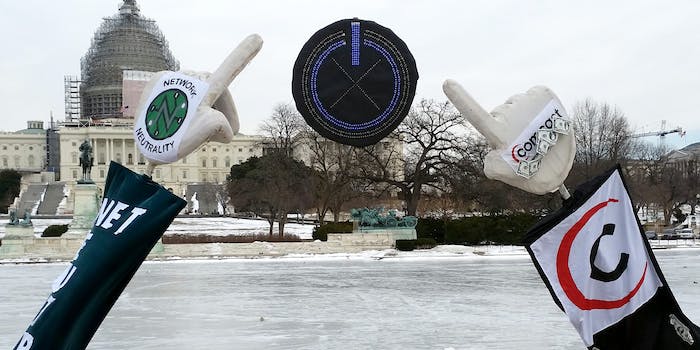 Comcast says the site violates its intellectual property, but activists are warning of censorship.

An open internet advocacy group says Comcast is attempting to censor a pro-net neutrality website launched in the ongoing fight against the Federal Communications Commission.

The group, Fight for the Future, says Comcast sent it a cease-and-desist order demanding the group take down the website Comcastroturf.com on the grounds that it violates the company’s “valuable intellectual property.”

Fight for the Future is leading a fight against a proposal by FCC Chairman Ajit Pai to overturn the Commission’s 2015 order that reclassified broadband internet providers like Comcast under Title II of the Communications Act. The reclassification served as the legal basis for the FCC’s rules protecting net neutrality, the principle that internet service providers (ISPs) treat all data delivered to customers—from websites to Netflix videos—at equal speeds and without censorship.

While Comcast and other ISPs claim to support net neutrality, the broadband industry has largely supported Pai’s plan, which would eliminate the hard-won federal net neutrality protections for internet users.

Comcastroturf.com specifically calls on Americans to help identify fraudulent comments posted to the FCC website in support of Pai’s plan. A number of investigations found that anti-net neutrality comments to the FCC were posted under people’s names and addresses without their knowledge.

The letter, sent by LookingGlass Cyber Security Center on behalf of Comcast, states that the site’s name violates anti-cybersquatting law and Comcast’s trademark rights because it is “confusingly similar” to “Comcast.” The letter demands that Fight for the Future turn over the website to the company or face legal action.

Evan Greer, Fight for the Future’s campaign director, said in a statement that Comcast’s cease-and-desist order is evidence of the need for net neutrality protections.

“This is exactly why we need Title II net neutrality protections that ban blocking, throttling, and censorship,” Greer said. “If Ajit Pai’s plan is enacted, there would be nothing preventing Comcast from simply blocking sites like Comcastroturf.com that are critical of their corporate policies.”

Comcast defended its cease-and-desist order in a statement to the Daily Dot, saying the company “supports strong, legally enforceable net neutrality rules and does not and will not block websites or content.” The company added, “Title II does not equal net neutrality.”

The company goes on to say that the notice was sent out by a third party, and the company does not plan to proceed with legal action “at this time.”

“Like most major brand owners, Comcast protects our company and brand names from being used improperly on the Internet by third parties. We use an established outside vendor to monitor for websites that use our name and brands without authorization, and the vendor routinely sends out notices to those sites. That is what happened here. This particular site also raised other legal issues supporting further investigation (for example, the site appears to collect personal information and has no posted privacy policy). After reviewing the site further, we do not plan additional action at this time.”

The FCC voted 2-1 last week to put Pai’s proposal (known as a “notice of proposed rulemaking” or NPRM) up for public comment, which will last for three months. Americans who wish to comment on the NPRM can do so by clicking here and then clicking “express.”

At the time of publication, Comcastroturf.com remains online.