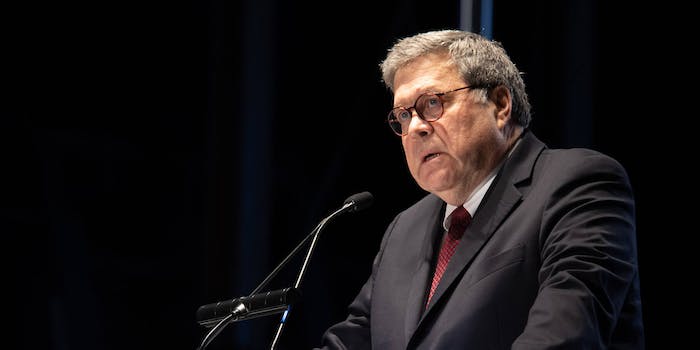 The Justice Department's probe was announced earlier this year

Attorney General William Barr hopes that the antitrust probe into major social media and big tech giants being conducted by the Justice Department will end next year, according to a new report.

Barr made the remarks in an interview with the Wall Street Journal.

In late July, the Justice Department announced that it was starting an antitrust investigation into companies like Google, Amazon, and Facebook, specifically “whether and how market-leading online platforms have achieved market power and are engaging in practices that have reduced competition, stifled innovation, or otherwise harmed consumers.”

Barr told the Journal that there was a “complete consensus” among the Justice Department and state attorneys general—some of whom have started their own investigation into the big tech companies—and that the investigation could lead to an “opportunity for legislative proposals” or enforcement.

The Justice Department’s probe comes as sentiment toward the tech giants has soured. The Federal Trade Commission (FTC) handed Facebook a $5 billion fine in July and 2020 Democratic presidential hopeful Sen. Elizabeth Warren (D-Mass.) called for breaking up companies like Facebook and Amazon, among others.

Meanwhile, the Senate Commerce Committee held a hearing last week about creating a federal data privacy law, which would have major ramifications for all of the companies.