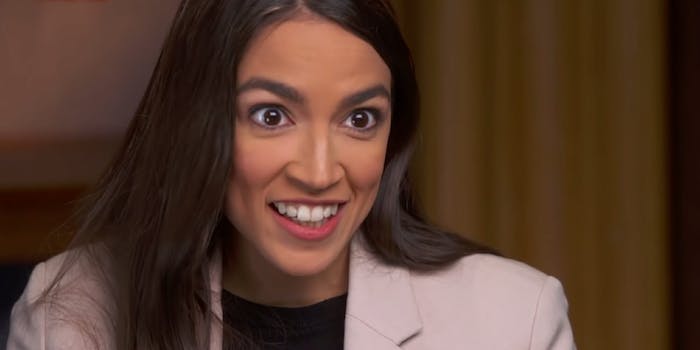 AOC understands her base better than any other politician.

There’s one thing Americans on both the left and the right can agree on: Rep. Alexandria Ocasio-Cortez (D-N.Y.) is good at the internet. Where Sen. Elizabeth Warren (D-Calif.) stumbles with her beer-drinking antics and Twitter universally shudders over Beto O’Rourke’s dental Instagram Story, Ocasio-Cortez feels like a normal person on social media.

Look no further than her recent appearance on Harry “Hbomberguy” Brewis’ Twitch livestream for the trans and gender nonconforming youth charity organization Mermaids U.K. After the U.K.’s Big Lottery Fund decided to review a £500,000 grant set for Mermaids amid ongoing criticism led by The IT Crowd creator and noted transphobe Graham Linehan, Hbomberguy decided to host a Donkey Kong 64 stream to support the charity. Nearly 58 hours later, he raised over $340,000.

Across the stream, a wide range of gaming figures and online trans celebrities popped in to hang out with Hbomberguy, from Doom’s designer John Romero to Chelsea Manning, respectively. But Ocasio-Cortez’s appearance brought the Twitch stream into the mainstream news cycle. For the first time in U.S. history, a sitting congresswoman specifically hopped onto a Twitch stream to chat about the need for trans-inclusive intersectionality and economic awareness around trans discrimination. And it wasn’t just any sitting congresswoman, but a politician known for her massive viral power.

This point wasn’t lost on the stream’s viewers, nor was it on AOC herself. During the stream, she discussed how trans discrimination is a “core reason for the economic hardship” trans Americans face in healthcare and housing issues. And when asked to say “trans rights” during the stream, she vocally expressed her support for trans equality, calling it a “no-brainer.” The chat blew up in praise.

“Trans rights are civil rights are human rights,” Ocasio-Cortez said during the stream.

Among other things, AOC also talked about the government shutdown, its impact on federal employees, and how Congress can go about handling trans anti-discrimination protections. She also stressed the need for Democrats to go on the “offensive” against the right, a point that resonated with viewers long after her appearance.

“2019 is the year we take out the trash. 2018 sucked like hell but 2019’s the time that we sweep the old crap away for good,” Lindsay Broadway, Leicester Young Labour’s LGBT+ officer, tweeted in a thread praising AOC.

AOC didn’t just relegate herself to talking politics. While hanging out on Hbomberguy’s stream, she opened up about playing on her cousin’s Nintendo 64 and why she thinks the N64 is “the best system out of all of them.” She also praised the @AOC_Dances Twitter account and a mashup that included her dancing to Men Without Hats’ “Safety Dance.”

It’s easy to overthink an appearance on a Twitch livestream by acting too friendly and too relatable. But AOC’s friendly and approachable demeanor feels natural. While she’s confident and authoritative in her political beliefs, she also acts genuine and friendly. Hearing her chat with Hbomberguy sounds more like two new friends hanging out at a convention over a round of Smash. She doesn’t lecture, she doesn’t try to act for her audience. She’s just herself.

That’s for a reason: While Ocasio-Cortez admits Donkey Kong 64 isn’t exactly in her “wheelhouse,” she’s familiar with the gaming community. In mid-October 2018, she tweeted that she was “dusting off my League account,” which “hasn’t been touched since the campaign started.” The tweet quickly went viral with gamers, as AOC was referring to Riot Games’ League of Legends, a popular MOBA and immediate competitor to Valve’s Dota 2.

Current status: dusting off my League account, which hasn’t been touched since the campaign started 😂👾

League of Legends is a notoriously complicated game, and while it’s popular among gamers in their teens, 20s, and 30s, it has an enormous skill curve. It can take some players months or even years to become good at the game. Regardless, while AOC admits she isn’t good at the game, she clearly knows her stuff: When asked by a Riot Games employee about her “mains,” or main characters, she quickly rattled off a list.

It’s easy to chalk up AOC’s Twitch appearance to “acting like young people,” as Aaron Sorkin once complained. But there’s more to the story than just Ocasio-Cortez’s age. As someone who’s played video games before and spends a lot of time on Twitter, AOC understands why a Twitch stream on trans rights is so important. She knows how younger constituents think, where their interests lie, and why they’ll turn to Twitch for a queer fundraiser. Her connection to gaming gives her an in to reach out to politically active gamers.

Sure, Ocasio-Cortez may not be a hardcore gamer about to sign up for the Overwatch League, but she doesn’t need to be. Unlike Warren and O’Rourke, she knows social media is more than a gimmick: It’s a platform for reaching voters. And she takes it very seriously.

“Thank you for doing this work, I really appreciate it,” Ocasio-Cortez said closing out her appearance on Hbomberguy’s stream. “I’m so happy that the movement isn’t all just about one person either. It’s that we can have these spontaneous, joyous, and supportive moments, and any one of us can be responsible and be the source of it.”

Young Democrats like AOC know that gaming isn’t just a niche, it’s a powerful community that can enact real change. It matters when Ocasio-Cortez says “trans rights” on a Donkey Kong 64 stream. Despite what Sorkin thinks, AOC is reaching her base, and she’s damn good at it.