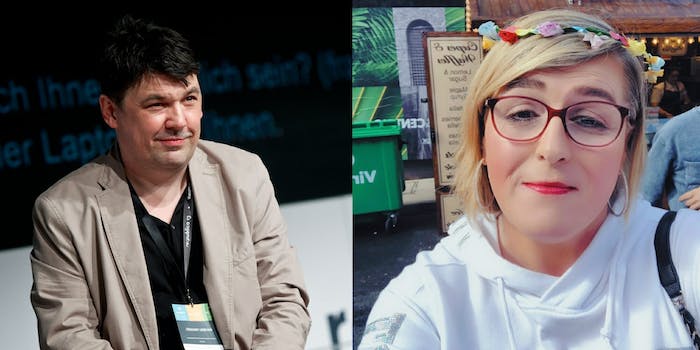 The lawsuit could set a game-changing precedent.

Irish television writer Graham Linehan created such popular British TV series as Father Ted and The IT Crowd, but Linehan’s behavior online may overshadow his comedy career. After allegedly deadnaming, misgendering, and doxing a transgender lawyer on the website, his target is taking him to the United Kingdom’s High Court in a legal battle that could set a precedent for transgender rights throughout the nation.

On Sept. 26, transgender lawyer Stephanie Hayden alleged that Linehan “publicly harassed me to over 650,000 Twitter followers” after “retweeting an account that doxxed me and published private details of my pre-[Gender Recognition Certificate] male identity,” Hayden wrote in a tweet. That account, called “terfclub,” has since been suspended by Twitter.

“Graham Linehan has retweeted details about my previous addresses, published photographs of me pre-transistion and published a photograph of someone very close to me,” Hayden continued. “He should be outed for what he is! A #transphobic middle aged man using #harassment to attack #transgender women!”

This afternoon Graham Linehan has publicly harassed me to over 650,000 Twitter followers by retweeting an account that doxxed me and published private details of my pre GRC male identity. This "celebrity" uses his Twitter account to harass #transgender women! Disgraceful! 1/2

Graham Linehan has retweeted details about my previous addresses, published photographs of me pre-transistion and published a photograph of someone very close to me. He should be outed for what he is! A #transphobic middle aged man using #harassment to attack #transgender women!

After allegedly sharing the private information to his Twitter followers, Linehan went on to continuously deadname Hayden, misgender her, and claim she “retaliated by going after my wife,” according to the Daily Mail. Linehan subsequently received a verbal harassment warning by West Yorkshire police, and shortly after, Hayden filed a lawsuit against Linehan over potential damages for “harassment, misuse of private information, and defamation,” which includes “libel and slander.”

“It was a gross violation of my privacy and who gets to know this information about me,” Hayden told the Telegraph. “Anyone can now type my name into Google and it will tell them who I used to be. I can never recover from the publication of that knowledge and it would be absurd to try.”

However, transgender activists in the U.K. should keep a close eye on Hayden’s case. If the High Court rules that Hayden’s deadname is private information and divulging her pre-transition identity constitutes harassment, it could set a precedent for future judicial protections for transgender people across the country.

7. Graham Linehan RTed the tweets of @terfclub without any care for whether what he was RTing was true, false, or harmful to innocent third parties. Linehan is #transphobic. He targets #transgender women like me for ridicule and harassment. Remember he has 672,000 followers!

What Graham Linehan did was to republish photographs of people associated with me, details of my former male identity, and then continued to defame, dead name, and misgender me! #transphobia #transgender #harassment

(#GRAHAMLINEHAM) (GL). On 29.09.18 @thetimes published allegations that I had targeted Mr Linehan's wife for #harassment. GL also alleged that I published his wife's private details online. This is denied in the strongest possible terms. Legal proceedings are to be issued. (1)

This isn’t the first time that Linehan has been accused of transphobia. The BAFTA award-winning writer tweets from a private Twitter account, @Glinner, where he regularly parrots TERF beliefs on transgender activists, such as allegedly arguing that it is “homosexual erasure” for trans women to identify as lesbians. While Linehan claims he “will call all of my trans friends ‘she,'” because “I think of them as women,” he also announced that he would only do so because “they are respectful and are not misogynists” and that he would “refuse to respect the pronouns of misogynists,” the Guardian reports.

For many transgender people, that viewpoint is insulting, as it claims trans people’s gender identity is only valid if they play by rules assigned to them by cisgender people.

“I don’t respect the pronouns of misogynists, stalkers of harassers,” Linehan allegedly tweeted, according to Hayden’s legal filing. “Yes we must always be nice to con men, sexual predators and misogynists hijacking a noble movement for their own ends.”