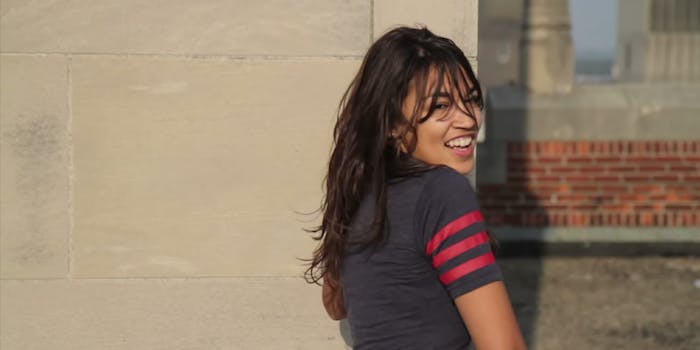 From Beyoncé to 'Neon Genesis Evangelion.'

Rep. Alexandria Ocasio-Cortez (D-N.Y.) is an activist, a democratic socialist, and apparently, a really good dancer. So much so that one Twitter user has created an account that superimposes music over a viral clip of Ocasio-Cortez dancing, adding everything from Lou Bega’s “Mambo No. 5” to Animal Crossing’s soundtrack.

Ironically enough, Ocasio-Cortez’s dance video first went viral from a right-wing Twitter user who tried to use the clip to attack the U.S. representative. In that post, the user complained that it shows “America’s favorite commie know-it-all acting like the clueless nitwit she is.”

The dance clip actually came from a YouTube video by Boston University’s Howard Thurman Center, where Ocasio-Cortez went to college. In that music video, several dancers recreate a popular YouTube mashup of the ’80s Brat Pack dancing to Phoenix’s “Lisztomania” during films like The Breakfast Club. Ocasio-Cortez features as one of the performers.

That user’s original tweet, which was made on Jan. 2 and has since been deleted, quickly caused the video to go viral during the week, with many Twitter users defending Ocasio-Cortez’s lighthearted dancing.

But that wasn’t it for the progressive politician’s viral response. Late Thursday night, a Twitter account called “AOC Dances To Every Song” began posting redubbed versions of the clip excerpt, with Ocasio-Cortez showing off her moves to pop songs, R&B hits, video game soundtracks, and meme music. By early Friday morning, over 5,000 users began following the account.

Another draws on “Megalovania” from Undertale.

And speaking of memes, there’s one for the incredibly popular metal hit (and unofficial AOC anthem) “Let The Bodies Hit The Floor.”

Twitter user @leftistthot420 created the @AOC_Dances account, ironically tweeting “i give it 24 hours or less before we get an ‘AOC dances to every song’ account up with 10k followers” prior to the viral account’s first post. Caught between a four-day stretch from her last day at one job and her first at another, she dedicated herself to the account, calling it a “HUGE success” because Chelsea Manning liked one of its tweets. (By Friday morning, Manning had liked three tweets from @AOC_Dances, as well as @leftistthot420’s post celebrating Manning’s interaction with the meme page.)

The Daily Dot reached out to @leftistthot420 for comment and is awaiting a response.

For the record, Manning isn’t the only one that loves the account. It’s since been flooded with support and praise for its hilarious take on the dance clip.

This is the greatest thing I've ever seen.

So many of them are making me smile and laugh, it’s worth scrolling through the account if you need a pick me up!

The @aoc_dances account is a reminder of the random, fun acts of creativity that used to characterize the Internet. Similar to the project overlaying The Last Jedi fight scene to popular music last year. https://t.co/VlvByFsXKl

A few users even have requests of their own, from “American Woman” to Queen.

Good night. Also with how happy and contagious her dancing is, may I request Pharrell Williams – Happy?

Update 11:23am CT, Jan. 4: In an interview with the Daily Dot, @leftistthot420 explained that the idea for the account came directly after she coined a tweet joking about an “AOC dances to every song” account idea.

“After about 10 minutes I realized, ‘Hey, I want 10k followers and can do minimal video editing,’ so I made the account,” @leftistthot420 told the Daily Dot. “And here we are!”

In @leftistthot420’s gut, she figured the account was going to go viral, but she said she was still “shocked” that it actually happened. Luckily, the online response has been “pretty overwhelmingly positive,” describing the account’s notifications as “a wave of serotonin.”

She also has a message for AOC: she’s a fan.

“I want to tell her I’m a big, big fan of her work, and she’s the kind of politician we need more of,” @leftistthot420 told the Daily Dot. “And also I’ll take a request if she has one!”

As for fans of the account, she says: “abolish ICE & respect trans people.”

The Daily Dot reached out to Ocasio-Cortez’s press office and is awaiting a response. On Friday afternoon, Ocasio-Cortez posted a video of herself dancing in front of her new office to Twitter with the caption: “I hear the GOP thinks women dancing are scandalous. Wait till they find out Congresswomen dance too!”