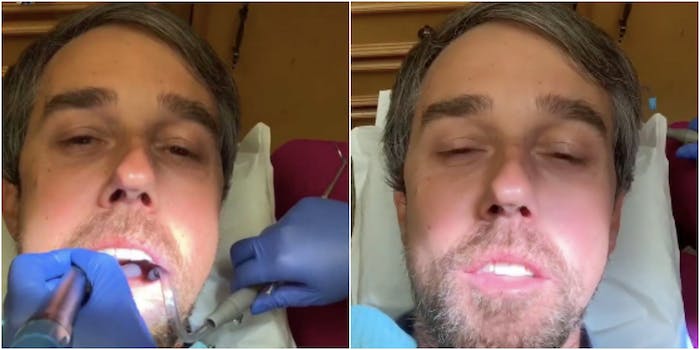 On Thursday, Texas state Rep. Beto O’Rourke decided to tell stories on Instagram while a dental hygienist worked on his gums. Naturally, people were all sorts of horrified.

The former Senate candidate and possible presidential hopeful exposed his followers to his dental-work storytime as part of his Instagram Story series “Who Are the People of the Border?” in which he speaks to those who live or grew up on the Texas-Mexcian border. It took a turn when, surprise, he started recording himself while in the dentist’s chair.

“Uh so I’m here at the dentist’s and we’re going to continue our series on the people on the border,” he says. “I’m here with Diana my dental hygien-[cuts off].”

Diana, whose last name is not mentioned, then shares the story about her mother’s journey from a small town in Mexico. When her mother was studying to become a U.S. citizen, Diana says, their neighborhood in a border town really helped her out.

While Diana’s story is heartwarming, people aren’t really sure about having to see Beto’s gums.

Yeah @kasie left out he was doing a series of lives at the border. Could have done without the mouth shots, but oh well.

Yes. Having teeth pulled is good preparation for running for office!

I voted for him and all, but ewww…

Some are using the moment to bring up healthcare, and those who can’t afford such dental work.

Maybe we can talk about why dental and vision are separate from regular health care when we know how important both are to overall health.

You are so lucky to be able to afford dental care. So many Americans can’t afford to get their teeth fixed.

True, and I’d bet he’d fight to get us Universal Healthcare.

Why on earth would he do such a thing? That's gross frankly and not very sensitive to the people who cannot afford to get dental care. That explains the post I seen, Bernie never took me to the dentist. What in the actual f*ck? People have lost their minds.

And here’s a meme that points out what we’ve all been thinking: How does this compare to Sen. Alexandria Ocasio-Cortez’s social media savvy?

Sharing stories on Instagram has become more popular among politicians recently, especially since Ocasio-Cortez casually discussed politics while cooking dinner in an Instagram Story back in November. While it may be making politics more accessible, exposing your gums is probably pushing it.