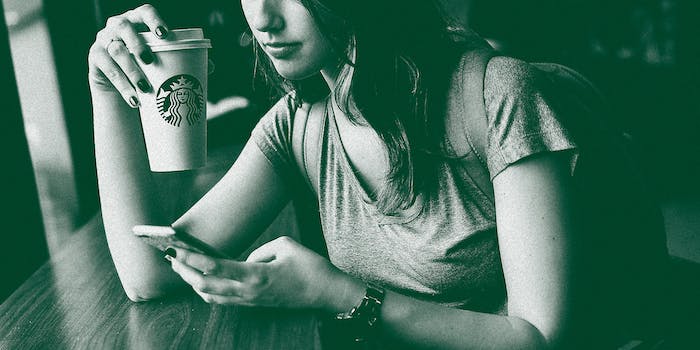 He says these types of videos are common on TikTok, but other employees don't get fired.

A Starbucks employee says he was fired over a humorous TikTok posted to the social media platform last year.

According to BuzzFeed News, the now-deleted video featured Eli Servais pretending to overreact to common customer complaints by way of skits acted out with his co-workers.

“In one example, an employee playing a customer hands a cold drink back and says, ‘I wanted this hot,’ and Servais responds, grabbing the drink, ‘I’m so sorry,’ and chucks it behind him,” writes BuzzFeed’s Tanya Chen.

It’s the sort of harmless video anyone on TikTok has likely seen time and time again—young employees at places like McDonald’s and Dunkin Donuts and Starbucks sharing videos goofing around with co-workers and giving a glimpse into what life working at these companies can be like.

While many of these videos have gone ignored by corporate and managers, there have been instances where employees have been fired, even if the videos themselves have seemed harmless and unlikely to damage the business.

His video, which he says was filmed without any customers in the store, racked up nearly half a million views before a district manager got involved and reportedly fired him.

A “separation letter” acquired by BuzzFeed News claims that Servais “demonstrated behavior not aligned with Starbucks Mission Values by posting content on TikTok that shows partners mocking customers [sic] orders, throwing drinks outside of the drive thru window and fanning out money from the cash till.”

Servais says he was told he could be rehired in another district, but not the one where he previously worked—something he doesn’t believe makes sense or serves as a fair application of policy.

“People were sending me TikToks of other people [making Starbucks jokes], which made me upset because such harsh actions were taken against me,” he told BuzzFeed. “I was just really upset by the way they treated me in the separation process—I didn’t know it was coming and I didn’t expect that to happen.”

In a world where social media has so actively permeated every aspect of our lives, the separation between work and personal life—and what’s acceptable to share online and what isn’t—is becoming blurrier every day.

And if places like Starbucks or any other retail or food service company want to maintain the facade that dealing with customers all day is a pleasant experience for employees at all times, not even stifling social media output is going to do the trick.