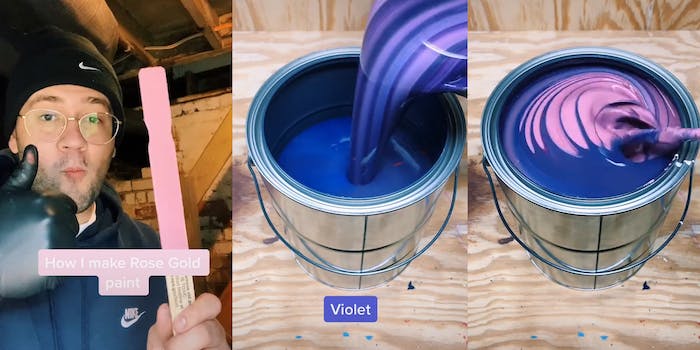 Tony Piloseno, the man behind popular paint-mixing TikTok account tonesterpaints, was fired from his job at Sherwin-Williams.

According to BuzzFeed, Piloseno, a student at Ohio University, was fired from the job in July after his employer allegedly discovered the account. The offense listed on official documentation provided to BuzzFeed is “gross misconduct,” though a spokesperson later claimed a “customer complaint” was the reason for termination.

Many of Piloseno’s earlier paint-mixing videos were filmed at his job, and the termination letter accused him of using company equipment and materials to make the videos on and off the clock. Piloseno posted a video about the termination last week, explaining that he’d come to the marketing department in the spring and pitched a presentation to show how Sherwin-Williams could be reaching a younger audience with TikTok. The VP of marketing allegedly declined the presentation, and Piloseno bought his own paint and continued to make videos.

He insinuates that a June video where he mixed actual blueberries into paint was the one that led to his termination, after Sherwin-Williams customer service was flooded with calls about it. The TikTok has more than 9 million views.

Piloseno says he was never given a chance to talk to his district manager or HR, or “tell my side of the story.” He’s been using a friend’s basement to continue mixing paints, and he’s now taking requests.