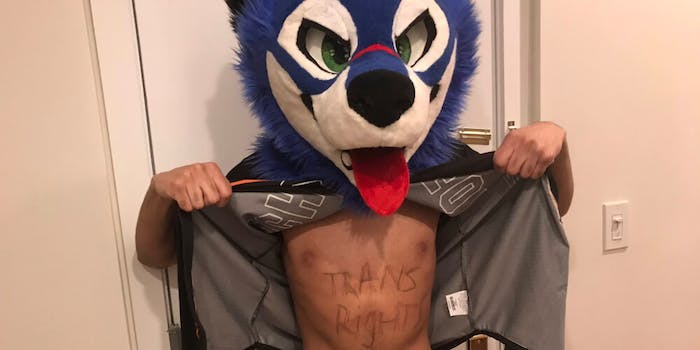 ‘I will finally explore my true identity’: SonicFox comes out as nonbinary

The beloved esports player SonicFox, who specializes in fighting games and gay shitposting, came out as a nonbinary man on Twitter yesterday—and their fans love them for it.

If you’ve been paying attention to esports for the last few years, you’ve almost certainly heard of SonicFox, who’s been competing in tournaments since they were 13-years-old. In 2018, they were named Esports Player of the Year at the Game Awards. In their acceptance speech, they quipped, “I’m gay, Black, a furry—pretty much everything a Republican hates.” Now there’s another marginalized identity SonicFox can add to that list.

SonicFox came out in a series of tweets Tuesday morning, asking people to use he/him and they/them pronouns. “I’ve been thinking critically about myself these last couple of months,” SonicFox wrote. “With that being said, I’m coming out as a Non-Binary Man!

“I’ve always thought of myself as 50% masc and 50% feminine. But I always felt ridiculed and made fun of for liking the more ‘feminine’ things of life,” they continued. They described defaulting to a uniform of hoodies and jeans because men’s clothing generally didn’t appeal to them, and they were too nervous to try feminine clothing. Finally getting to explore, they said, feels like “a huge sigh of relief.”

I’ve always found myself enjoying things that were typically considered “not masculine” and I’ve always thought of myself as 50% masc and 50% feminine. But I always felt ridiculed and made fun of for liking the more “feminine” things of life.

SonicFox will always have haters, but their fans are much louder, and they celebrated their newfound gender with art, affirmations, and memes.

Be your ideal self
You deserve it for all the good you put into the world pic.twitter.com/WZ1zm5vHiU

One quiet, meticulous move of support came from someone who, within a few hours of SonicFox coming out, changed all the pronouns on their Wikipedia page to they/them.

SonicFox says they’re still figuring out their identity but they can, “finally explore my true identity and take extra measures for self-care for like the first time ever!!!!”