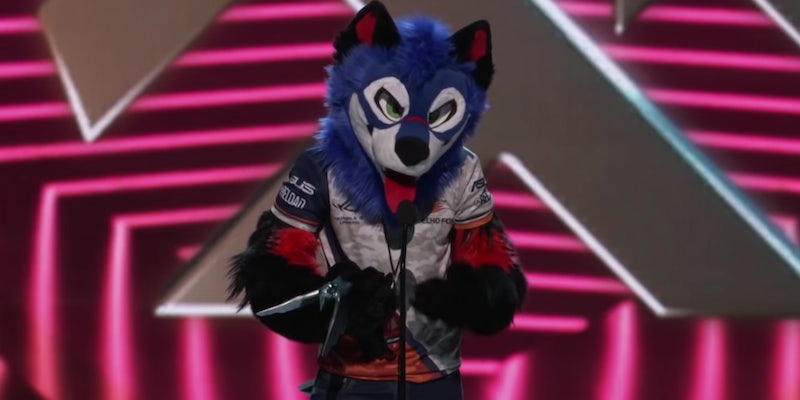 He's dunking hard on the haters.

Meet Dominique “SonicFox” McLean, a self-described “Black Queer Furry who will mix your shit in fighting games.” SonicFox was just crowned Esports Player of the Year at the Game Awards 2018, and for a victory lap, he’s been dunking hardcore on Twitter’s right-wing users all weekend.

It all began when SonicFox gave a shout out to the queer and furry communities during his acceptance speech at the Game Awards on Thursday.

“I’m gay, Black, a furry—pretty much everything a Republican hates,” he quipped to laughs and applause.

In response, SonicFox had some choice words for his far-right critics: “suck my fucking dick LMFAOOOOOOO.”

ya and yall ugly as hell too LMFAO get the fuck out of my gaming circuit https://t.co/4xw1Lnaaoz

yall have literally oppressed me my whole life and the livelihood of me and others, yet.. I still made it here. Its definitely more than a game. Yall catching that dunk on a huge platform right quick lmfao https://t.co/GTKkh469uf

I swear every asshole/ shithead i’ve encountered in general be having “quirky” profile pictures that look like pic.twitter.com/ll46wegH5l

Now I don’t REAAALLY hate republicans, that’s a strong word! But if I had the Thanos glove I mean.. wyd???

Cheong and fellow right-wing YouTuber Jeremy “TheQuartering” Hambly quickly tried to smear SonicFox by claiming he “thinks it’s cool to assault women” after he enjoyed a video of a pro-life camerawoman accidentally getting kicked by a pro-choice activist. Unfazed, SonicFox proceeded to dunk mercilessly on the two goons.

bitch your face is built like a balloon with sunglasses lower your tone https://t.co/kUJDyC3dYJ

i got no time for somebody to talk to me, a black guy, who thinks its ok to say the N- word LMAO. You actually don’t have shit on me. If it was relevant to your agenda, you’d have pointed it out two months ago. Don’t got time for racist anti-Semitic people. https://t.co/VRK3peTXZe

these incels stay being concerned with me still I love it

SonicFox doesn’t mind the attention either. As he pointed out, the more the right talks about him, the more they give him “fuel and free clout to dunk on them.” It’s basically free advertising for his Twitter account. (The Daily Dot reached out to SonicFox about his weekend of dunking, but has yet to hear back.)

Meanwhile, the rest of the internet has fallen in love with SonicFox for shutting down his right-wing haters. It’s been a good weekend for the esports world’s favorite gay Black furry.

Watching @SonicFox5000 systematically dunk on racists and homophobes has been so uplifting, so I did a quick sketch for that and a congrats on the best esports player award!

He has become Super Gayan.

That was awful, I'm sorry. pic.twitter.com/dWw1rDy6PP

we stan a Legend ✨ pic.twitter.com/F0toQQoKlr

Sonicfox: "I'm everything a Republican hates."

Republicans: *proceed to prove him right by hating him*

As for why the right hates SonicFox, well, he’s loud about his identity as a gay Black furry and he’s making room for queer Black esports athletes. The right can’t maintain the status quo when he’s the biggest esports player of the year, and they know it.

“It is the first time in their lives that someone is ready to stand against them that has a voice in what they thought wasn’t ‘political,'” SonicFox tweeted.

I think the main reason they’re so mad is because no matter how much they dislike what I say or do, they have to pay attention to me now. It is the first time in their lives that someone is ready to stand against them that has a voice in what they thought wasn’t “political”. https://t.co/xapbmdg2fW

They can say I’m irrelevant all they want, as they continue making videos about me,

making me relevant.
FYI if you think my way of life and existence is political too, you’re actually part of the problem.

Editor’s note: A previous version misstated the way the pro-life camerawoman was assaulted. We regret the error.