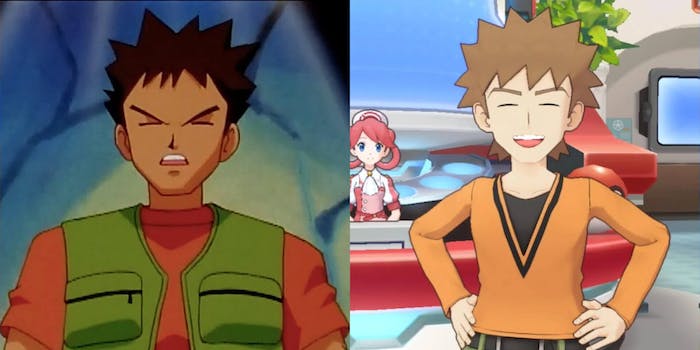 Pokémon games have been whitewashing Brock for years.

Brock Harrison is one of the most beloved and well-known characters in Pokémon canon. He’s been a franchise staple since the days of Pokémon: Indigo League and has appeared in many video game adaptations. Famous for being the rock-type gym leader of Pewter City and one of Ash’s closest companions, Brock was long ago cemented as iconic in fans’ eyes.

So why does The Pokémon Company keep ruining his character’s appearance in its games?

Brock—a burly, brown-skinned, dark-haired young man—is instantly recognizable thanks to the anime’s enduring popularity. However, Pokémon game developers have, for some reason, taken it upon themselves to significantly lighten up his skin and hair for their games, all of which are already predominantly populated by white-looking characters. Designers have done the same in the newly-released title Pokémon Masters—and Brock’s the whitest he’s ever been. It’s a classic and painful example of whitewashing, or portraying characters of color as white people.

It’s not like the developers are incapable of designing more diverse characters. Furthermore, white or white-looking characters from the original anime didn’t get such drastic makeovers. It’s time to take a long, hard look at the history of Brock’s designs to figure out where this all started.

The legacy of Brock

Brock made his franchise debut in the very first set of Pokémon games in April 1996. Pocket Monsters Red and Green—followed by Blue that October—featured a jumble of pixels that only faintly resembled the gym leader we know today. In the time leading up to Brock’s first episode (“Showdown in Pewter City”) airing, the show’s animators didn’t have much art to go off of. They—not Game Freak—were the creative forces behind his truly fleshed out appearance. The anime’s depiction of Brock is, for all intents and purposes, his original full-fledged design.

Curiously, neither The Pokémon Company nor Game Freak seem to have ever faced similar qualms about whitewashing Brock in games. Perhaps they never faced enough widespread backlash to prompt them to think twice of it. Regardless, people are unquestionably noticing now.

Brock’s in-game art through the years

Though Brock appears in the earliest Pokémon installments, we’ll go ahead and let Gen 1 slide. As stated before, those early GameBoy and GameBoy Color games are pretty rocky in the graphics department, and it’s difficult to see any of the sprites clearly. Meanwhile, in Gen 2, Brock is slightly more visible and appears to have as much melanin as he did in the anime. But we’ll skip those games, too, since they were similarly limited by GameBoy Color graphics.

Thus, we begin at Gen 3, where we see a distinctly whiter-looking Brock for the first time.

Pokémon FireRed and LeafGreen, the über popular Gen 1 remakes, are the first games to clearly feature Brock with fair skin and light brown hair. This is quite a departure both from the anime (which at this point was on its seventh season in Japan) and even the vague, pixellated Brocks of previous generations.

The Brock of Gen 4 has somehow gotten fairer while more or less retaining his Gen 3 hair color. If we’re being honest, he doesn’t even look like Brock anymore. The person of color erasure here is less egregious than that of Masters’, but only by a hair—literally. The character has very light brown, very not Brock-esque hair.

The Black 2/White 2 devs recycled Brock’s HeartGold/SoulSilver sprite for Gen 5, so his appearance is the same. He is as inexplicably whitewashed as he was in the last two generations. Why, Game Freak? Where did this come from? What did nonwhite Brock ever do to you?

The Let’s Go titles graciously bestowed just the tiniest smidge of color upon our gym leader’s skin. He’s very obviously Brock again, in contrast with the generic frat guy from Gens 4 and 5. While this design isn’t ideal, it’s not nearly as questionable as Pokémon Masters and Fratty Brock.

The Pokémon Company and Game Freak certainly have one thing going for them: They made a decision for FireRed and LeafGreen. They made a different character design than the anime. Over the course of several games, they more or less stuck to it. That, in and of itself, is fine.

Whitewashing one of the few gym leaders of color, however, is less fine. There is no technological excuse, no tradition-supported argument in defense of this ongoing artistic choice. There’s been a steady rise of whitewashing callouts in the television and film industries, and it seems only fair to apply the same standard to other forms of entertainment. At the very least, Pokémon developers should take a hint from the success of works like Black Panther and Crazy Rich Asians—not to mention the pure adoration fans directed at Pokémon Sword and Shield‘s gym leaders of color—and give Pokéfans the Brock we deserve.