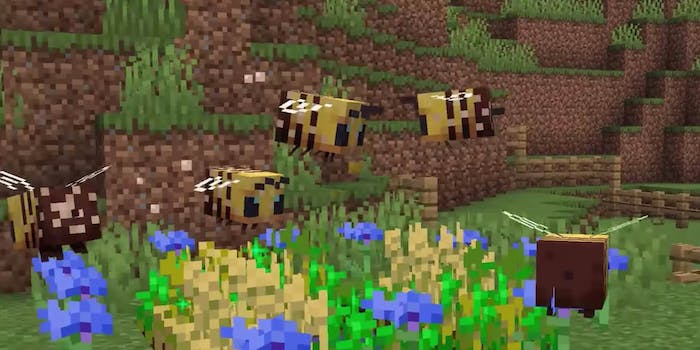 ‘The Minecraft Bee is trans’ meme is here to stay

A tweet launched a meme about the Minecraft bee, and there's no turning back now.

Sometimes a shitpost creates a legacy. The latest example is the seemingly endless debate around the “Minecraft bee is trans” tweet. If you’ve seen any of the thousands of references made to it on Twitter alone in the last couple of days and have no idea what’s going on, let us lay it down for you.

It all began with the now-deleted tweet from former Twitter user @Ezramouse (the current user @Ezramouse is a different person). Seen here in the screenshot below, @Ezramouse tweeted the phrase “The Minecraft bee is trans” with no explanation attached. User @WormsCrazyGolf then replied, asking how, only for @Ezramouse to block him.

Sadly, because this is the internet, people started flooding @Ezramouse’s timeline and DM’s with the word “how,” as well as demanding an explanation and acting like the statement that the Minecraft bee is trans was somehow a personal attack on them and all cis straight people. @Ezramous locked down their account and changed their username.

Just to make things even more obvious. I’m not the person that called the Minecraft bee trans. They changed their twitter and I’m just trying to have fun pic.twitter.com/HzGm8sCGvA

Meanwhile, thanks to all the attention from people mortally offended by the idea of a trans Minecraft mob, the Minecraft bee being trans had taken on a life of its own. Surprisingly, (or maybe not, as the refrain of this article goes, this is the internet), there was already a Reddit sub dedicated to the convergence of trans people and bees. They were excited about the Minecraft bee and welcomed the declaration that the bee was trans by making them some other LGBT+ bee friends.

i made a texture pack from TraaButOnlyBees

Meanwhile, on Twitter, those in the know about the bee seem to be in three camps. Those who love and venerate the bee.

Minecraft bees are trans pass it along pic.twitter.com/duqykaPh4i

Some of whom also recognize it was a shitpost and that everybody losing their minds over it need to grow up.

“Ahahaha liberals are so easily triggered”
*posts retextured Minecraft bee to have trans flag*
“NO THE BEE IS NOT TRANS WTF THEY ALWAYS DO THIS AND TRY TO SHOVE THEIR SEXUALITY IN OUR FACES” pic.twitter.com/7Axi8V6UYP

Those for whom the bee is an apocalyptic crisis that must be defeated, and its proponents punished.

Me when I see people say that minecraft bee is trans pic.twitter.com/pNCCxXpC20

Just a reminder for all that stupid people that think the #Minecraft #bees are some trans shit. pic.twitter.com/c0ojyeTfCF

And those who really don’t give a damn but think its deeply troubling that the second group are so worked up about a group of trans people enjoying themselves with something silly.

The point about "The Minecraft Bee is Trans" is that it's a meaningless statement that went viral because it pissed off transphobes disproportionately. The point is, if that statement triggers you, you're human pondscum.

If anything the poster just didn't want to deal with the kind of person that would take it seriously. They must've been pretty fed up with Twitter in general, but it's fine. I block for just as petty reasons, like for posting vertical timeline spam.

Some interesting context is the fact that all Minecraft creatures are actually genderless until they try to reproduce, at which point a sex is randomly assigned to them. In between mating, they go back to being agender, with a new and potentially different sex assigned the next time. While obviously real-world animals don’t have human genders and sex doesn’t determine gender identity, it’s still closer to the “Minecraft bee is trans” camp than those outraged by it.

Miku herself said that all Minecraft mobs have no gender. They are nonbinary. Not only are the bees trans, every single mob is trans pic.twitter.com/8qVT5sg9o7

I absolutely love the idea of Minecraft trans bees, gay bees etc. Especially since nothing in Minecraft has a gender. NOT SARCASM. I actually think it's really cool pic.twitter.com/LP8GrMWZUk

They are trans in the coding itself. Creatures in Minecraft don’t have a sex until they attempt to reproduce and at that time it’s randomly decided which creature in the pairing is “male” and which is “female”. If they attempt again later, it may switch around.

I know the original "Minecraft bee is trans" was a shitpost but do the people mad about it really not realize that no animal in Minecraft has a sex or a gender? They're all non-binary (or non-beenary if you will)

Interestingly, while Markus ‘Notch’ Persson, the creator of Minecraft, was removed by Microsoft because of his transphobic comments and other unacceptable online behaviors, he had previously posted about this topic on Tumblr. In the post, he states that all the characters and creatures in Minecraft are agender (an identity covered under the trans umbrella) and that this also makes them all homosexual because there’s only one gender to choose from.

It’s pretty hard to argue with that, though people are certainly going to try. In the meantime, everyone else is going to keep having fun with the trans Minecraft bee.

The Minecraft bee is trans AND pan. Please quote tweet me reactionaries I need followers PLEASE

i cant believe this is so controversial now but minecraft bee says trans rights!!!#Minecraft #Minecraftbees pic.twitter.com/AnJSwzEsVH