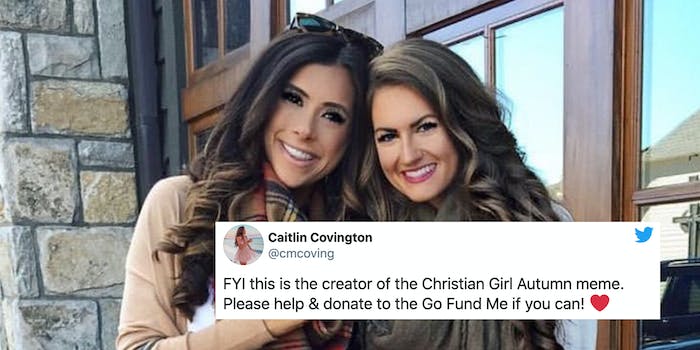 Pumpkin spice and everything nice.

After rising to internet virality as the face of the “Christian Girl Autumn” meme in 2019, influencer Caitlin Covington is now giving back to the trans creator who helped popularize the trend in the first place.

“Christian Girl Autumn” originated as a successor of the “Hot Girl Summer” movement, which took over in the form of memes, jokes, and music last summer under the influence of “WAP” rapper Megan Thee Stallion. “Christian Girl Autumn” plays into the aesthetic of Pumpkin Spice Lattes, combined with Chelsea boots and blanket scarves, to make light fun of the specific archetype.

Covington became an OG of the trendy memes in 2019 after photos of her fall photoshoot blew up online thanks to a post by trans creator, Natasha, who used the photos to troll her followers. “Hot Girl Summer is coming to an end,” she wrote at the time. “Get ready for Christian Girl Autumn.”

Since then, Covington has gained thousands of followers and massive influence online. She credits Natasha’s funny post with much of that recognition and is now using that singular internet moment, along with her newfound platform, to help Natasha, who has started socially transitioning.

“Hi, i wasnt gonna make one of these but i’ve been in a really bad place lately, so this is my gfm for HRT, gender affirming procedures, and doctors visits,” wrote Natasha in a recent tweet, linking a coinciding GoFundMe.

Covington donated $500 to the cause, sharing the link with her followers and writing, “FYI this is the creator of the Christian Girl Autumn meme. Please help and donate to the Go Fund Me if you can!”

“I am always in favor of people embracing who they really are and to feel confident in their own skin and find happiness,” she said. “Natasha has been vulnerable about her transition and about the struggle to be accepted by her friends and family, which I think is so courageous.”

Natasha told Insider she wasn’t “expecting that much” from Covington and that she is grateful the influencer used her platform to promote the GoFundMe.

“Caitlin’s such an amazing woman and has an endless supply of kindness,” Natasha added.