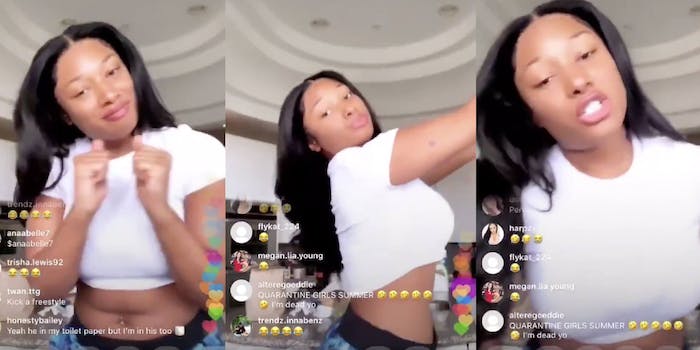 'I'm in quarantine, so you know I ain't bopping.'

Megan Thee Stallion blessed fans with another bop on a recent Instagram Live. But instead of another hot girl summer anthem, Megan gave fans a quarantine anthem to help get them through social distancing.

Megan remixed one of her signature tracks, “Hot Girl Summer,” which she released in August 2019 with Nicki Minaj and Ty Dolla $ign.

“Not a whole lotta options but you know that sh*t’s stopping/I’m in quarantine so you know I ain’t bopping,” Megan started off.

“It is what it is b*tch I’m sitting in the crib/I’m a big ole freak but I ain’t getting no d*ck/it’s a quarantine summer and you know I ain’t lit.”

Megan has encouraged fans to stay home and self-isolate on social media. She recently started the hashtags #hottiesathome and #healthcarehotties to help fans who may have lost their jobs due to the coronavirus pandemic. Megan told followers to tweet their Cash Apps using #hottiesathome and #healthcarehotties and said she would send money to some fans.

And while many are staying at home, “Savage” from Megan’s latest album Suga has gone viral on TikTok as part of a dance challenge. Creator Keara “Keke” Wilson posted the dance on March 10, and it has since been recreated by countless popular TikTokers like Charli D’Amelio, Addison Rae, and Emma Chamberlain.