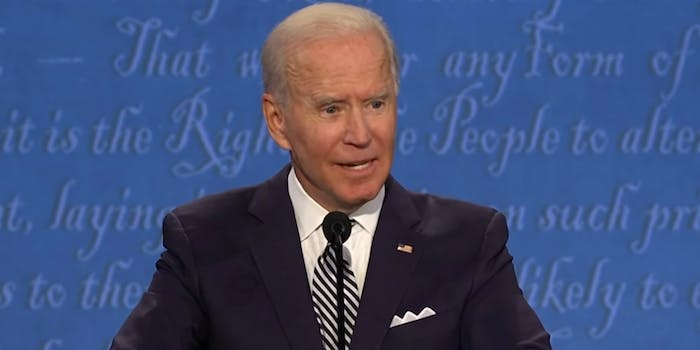 Biden has spoken publicly about his stutter in the past.

The former vice president faltered in his speech multiple times throughout the night, either stumbling over his words or taking an extra moment to compose his thoughts.

It wasn’t long before Twitter users noticed the stutter and openly made fun of it. Some decided to make a drinking game out of it, tweeting they’d take a drink or shot every time Biden stuttered.

Others claimed it’s a sign he’s lying and said it’s the “funniest shit ever” to watch.

Biden struggled with a stutter for much of his childhood, and he’s spoken publicly about it multiple times.

In 2011, he wrote a personal essay for People Magazine about his experiences. While in seventh grade at a boys’ prep school, a couple of nuns reportedly taught him to speak to a cadence, which helped him slow down his speech and overcome his impediment.

Despite never receiving professional speech therapy, Biden mostly overcame his stutter, and it never seemed to hinder his professional career, as is evident from his 47 years in politics.

But for many people who overcome stutters, it still may come back during times of stress or pressure, like Tuesday night at the debate.

Many have questioned the mental capacity of people who stutter, especially people who are attempting to lead the country. However, stuttering is simply a communication disorder involving disruptions, or “disfluencies,” in a person’s speech, according to the National Stuttering Association. It affects about 1% of the world’s population.

Biden addressed the matter again at a CNN Town Hall in February.

Many online were quick to defend both Biden’s stutter and mental capacity after Tuesday night.

“Biden grew up with a stutter. Speaking slowly and pausing between sentences are common strategies for dealing with a stutter. If I catch you calling Biden mentally incompetent because of the way he speaks, I will physically fight you,” one user tweeted.

Nathan Heller, a New Yorker staff member with a stutter, tweeted that Biden “has steel in his bones” for having the courage to speak openly about his stutter.

The resounding sentiment on Twitter, though, is that if a person mocks Biden for his stutter, they’re an ableist.

“When we’re talking about this debate over the coming days/weeks, i hope we remember that Joe Biden has a stutter and the ableist language against that will never be, clever, funny, or okay in any way,” one Twitter user wrote.