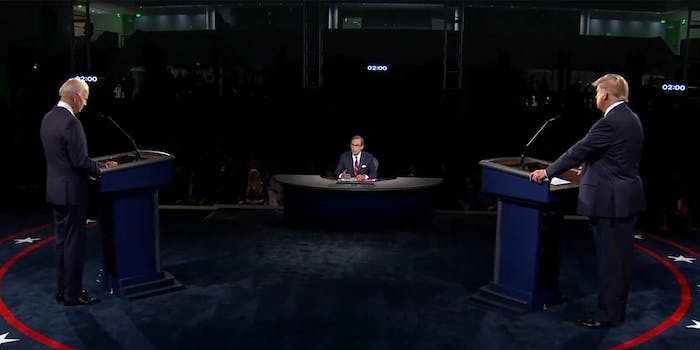 The biggest question Twitter users have from the debate: Can we mute the mics next time?

The president interrupted both the moderator and Biden at least 128 times.

Last night marked the first presidential debate for the 2020 election. Aside from chilling moments like President Donald Trump’s refusal to denounce white supremacists, Chris Wallace’s failure to pin down any new and vital information from either party, and no progress on COVID policies, Twitter users have a large issue with the constant interruptions by Trump toward both the moderator and Joe Biden, which Slate reports occurred “at least 128 times.”

Months leading up to the debate, both presidential campaigns agree on a set of rules. One specific rule—that each candidate would have two minutes of uninterrupted time to answer each question—went mostly ignored. Instead, Trump intervened almost every time Biden responded to a question and cut off Wallace each time he tried to get him to respect the rules. Biden also interrupted Trump at times with one-worded remarks. This interruption took place during the entire 90-minute debate, causing many Twitter users to voice their frustration online. The new consensus afterward? Can we please mute the mics next time?

As Jen Ortiz tweeted, “have we learned nothing from Zoom?”

The constant speaking out of turn made it difficult for viewers to follow along while simultaneously allowing less time for full, thorough responses to be given. Many Twitter users noted that the debate felt more like an argument or quarrel than a productive, political discussion.

Wallace did not have the authority to cut anyone’s mic and regulations would have to change in order for that to take place before the next debate. An article from the Los Angeles Times in 2016 notes the same issue with interruptions during 2016’s presidential debate between Trump and Hilary Clinton. “Monday night, both candidates interrupted, but Donald Trump interrupted far more eagerly than Hillary Clinton did — 25 times in the first 26 minutes,” Mark Oppenheimer wrote. Twitter, for one, thinks it’s time for stricter rules.