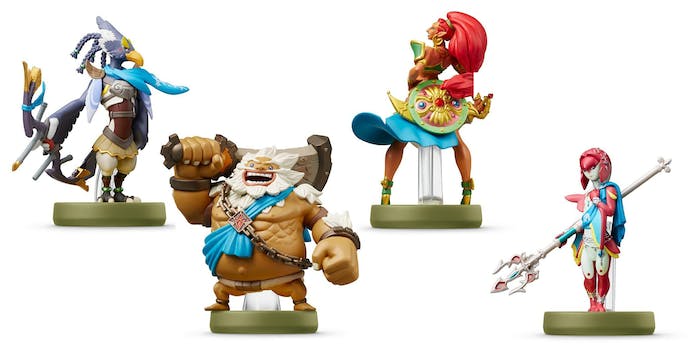 Slay Ganon with these ‘Breath of the Wild’ Zelda Champions amiibo

Hyrule has no fiercer warriors than its champions. All four Zelda Champions amiibo are here to lend Hyrule’s hero a hand.

Gentle Zora Mipha, prideful Rito Revali, fatherly Goron Daruk and fierce Gerudo Urbosa are all getting their own amiibo. Using them in Breath of the Wild will unlock materials and weapons, giving you a helpful boost. They also unlock exclusive Divine Beast headgear corresponding with each champion’s beast. Pretty cool, huh? Nab them just in time for the release of Champions’ Ballad DLC which releases later in 2018.

These Breath of the Wild Champions amiibo release on November 10 and are available for pre-order on Amazon for $15.99 each.