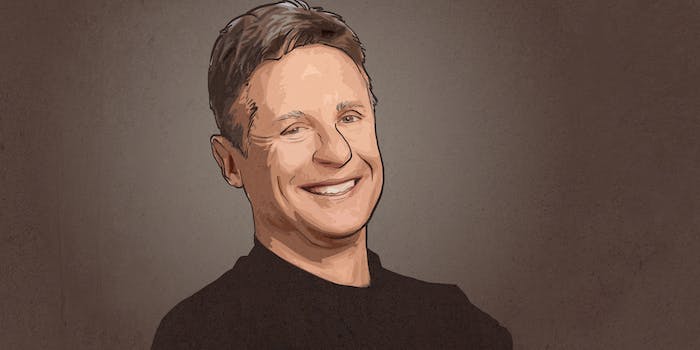 Johnson could be a thorn in Clinton's side.

Democrats and Republicans are both historically unhappy with their choices for president.

Which makes the long-shot bid of former New Mexico governor and Libertarian candidate for president Gary Johnson even more interesting. Johnson’s popularity is at an all-time high in the heartland, where he’s polling at 15 percent, according to a CNN poll released on Wednesday, and his name will likely be on the ballot in all 50 states in November.

Johnson and running mate William Weld will appear Wednesday at a CNN Libertarian town hall hosted by Anderson Cooper, the campaign’s most high-profile event yet. There’s even a chance Johnson will be allowed to join major party nominees Hillary Clinton and Donald Trump for the presidential debates in September, even if he doesn’t clear the 15 percent threshold in national polls to qualify.

Tune in tonight to @cnn #townhall with @andersoncooper pic.twitter.com/OCGzRrM77e

Right after the two weeks of scandals, attacks, and protests that marked the Republican and Democratic conventions, the increased focus on Johnson comes at a time where some may be longing for a third option. Trump’s disrespect of Gold Star families, GOP leadership, and babies likely won’t do him any favors in the polls. The resignation of DNC Chair Debbie Wasserman-Schultz and other DNC leadership following the Wikileaks e-mail dump is a recent drawback for the Clinton camp.

But who exactly is Gary Johnson, and what ideas fuel his campaign?

Here are a few things you should know:

Johnson served as the Republican governor of New Mexico—a Democratic stronghold—for nearly eight years. He recently explained how he juggled the two conflicting principles in Politico:

I was the Republican governor of a very Democratic state. I succeeded because I brought a brand of fiscal conservativism, together with respect for people with different lifestyles. Government must live within its means, and we have to respect one another’s freedoms.

When he ran for the Republican presidential nomination in 2012, Johnson’s profile was that of a fiscal conservative who was pro-choice, pro-pot, pro-LGBT rights, and anti-war. He was a politician who could win over voters of a traditionally blue state. His status as a former Republican is also likely to give Johnson street cred among Republicans who may otherwise be nervous about voting for a more traditional Libertarian candidate.

Johnson is one of the highest-ranking public officials who support legalizing marijuana. The former governor is public about the fact he smoked marijuana for medicinal purposes from 2005-2008. Johnson told the Weekly Standard that a paragliding accident left him with a broken back and ribs, and he chose marijuana to alleviate the pain instead of painkillers. He stood up for marijuana after 2012 Republican presidential candidate Mitt Romney made the claim that marijuana “makes people stupid.”

“As someone who has used marijuana, I do not agree with that,” Johnson told CNN’s Erin Burnett.

Johnson has maintained that he no longer smokes marijuana and would not smoke pot in the White House if elected president.

3) Johnson does not support raising the minimum wage

Johnson is against Clinton’s proposal for a $15 federal minimum wage and any federal involvement in a wage floor. He even went as far as to joke about a $75 minimum wage.

Johnson told the Washington Examiner that he would repeal the existing $7.25 federal minimum wage if elected president:

I do not think government should be involved in this. I think it eliminates jobs, I think that people starting out in the job market, that they should be given all the opportunity they can to get the jobs that may or may not be available. But government picking a number, and they’re going to pick $15, and gee how does that work with the accompanying inflation that always goes along with this?

4) Johnson is for the TPP

Johnson performed a flip-flop on the controversial Trans-Pacific Partnership trade deal. The Libertarian raised his suspicions about the Trade Promotion Authority in the past and vetoed many trade deals while governor. But in recent interviews Johnson indicated he was pro-TPP.

Johnson details his stance on internet freedom on his campaign website. “There is nothing wrong with the internet that I want the government to fix,” said Johnson.

Under a Johnson administration, the federal government would have as little of a role on the internet as possible. Johnson has criticized the Patriot Act and cybersecurity legislation for allowing the government access into the lives of private citizens. Johnson is against government mass spying and warrantless wiretapping, and he supports strong encryption technology with no backdoors.

6) Johnson is a bigger threat to Clinton than Trump

While Johnson is a former Republican, his socially liberal values may hold more sway over on-the-fence Clinton supporters. FiveThirtyEight found that Clinton’s lead over Trump decreased in polls where Johnson appeared as an option. Trump’s standing in the polls, on the other hand, showed no impact. Johnson himself noted his power over Clinton’s supporters in an interview with the Los Angeles Times. He noted that his pro-choice and pro-immigration platform was likely to go over well with Clinton’s base. Johnson also guessed that Clinton’s status as a member of the establishment also was to blame.

On Hillary’s side, I don’t think it gets more establishment than Hillary Clinton. If I had one word to describe Hillary it would be “beholden.” Nothing’s gonna really change, government’s gonna have the answer to everything, and that’s gonna mean taxes are gonna go up. If taxes go up, in my opinion, that’s less money out of my pocket that I could be spending on my life. And then she has been the architect of our foreign policy and using Libya and Syria as an example—this was not purposeful, I mean it’s her and it’s Obama, not purposeful—but they go in and we ally ourself with the opposition, we arm the opposition. Then the opposition is allied with ISIS. So the opposition gets knocked out and all those arms go over to ISIS. Well, this is an unintended consequence of what we do and it just seems like the story goes on and on and on. So I don’t think things are going to get better with Hillary. I think Hillary is going to be more hawkish perhaps than Obama. Perhaps more hawkish than Trump.