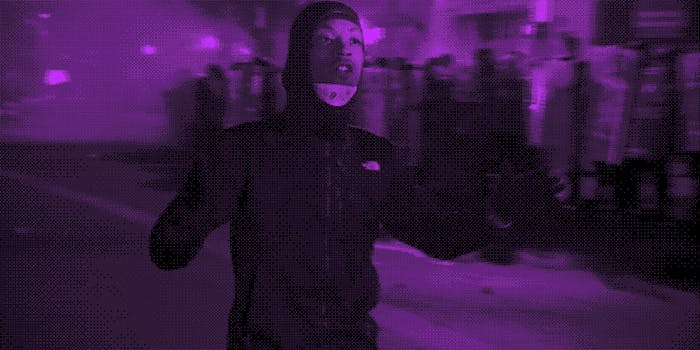 Joseph Kent, man ‘kidnapped’ by Baltimore police on live TV, gets out today

Where is Joseph Kent? Soon, home.

Kent was charged with violating the city’s 10 p.m. curfew, a CBIF employee said. The employee said she was instructed to not provide further information, and refused to say who had arrested Kent or to speculate on when on Thursday he would be set free.

He was one of many protesting in Baltimore after the police negligence-related death of Baltimore man Freddie Gray. Those protests have turned violent, with multiple officers reported injured, an unknown toll on civilians, and conflicting reports about who’s starting the violence.

Kent’s actual arrest, caught as if an afterthought on CNN right before 11 p.m. Tuesday night, provided a shocking image: a single man approaching a long line of riot police, suddenly swept away in a van with remarkable speed.

#JosephKent got me feeling like America is a military state.. when did the @BaltimorePolice start lookin like the paramilitaries in Colombia

#JosephKent kidnapped live on CNN and bundled into a National Guard hummer pic.twitter.com/ZXBWXaYNM9 Venezuela? Baltimore, US!

The one thing #JosephKent stressed to me most was he didn't want any more violence. Please honor his wish. He earned it with his liberty.