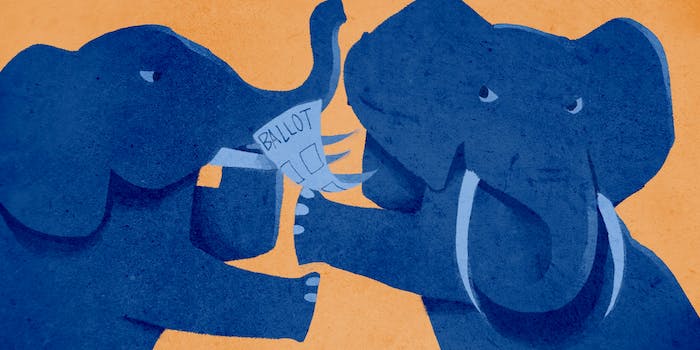 What happens if the GOP holds an open convention?

The dynamics are about to change.

Think the 2016 election has been wild so far? Just wait and see what happens if no Republican presidential candidate gets the majority of delegates by the end of primary season.

In such an event, the party may hold what is known as a contested convention to pick the party’s nominee. With Texas Sen. Ted Cruz’s solid victory in the Wisconsin primary on Tuesday night, the odds of that happening are greater than ever.

A party may elect to hold a contested convention (also known as an open convention) if there’s no clear winning candidate with the majority of delegates after the primaries are over. This is incredibly rare. According to the Congressional Research Service, the role of the national conventions historically has been to ratify, rather than pick, the party’s nominee for president. In the case of Republicans this year, a candidate will need 1,237 delegates to win the party’s nomination outright and avoid a contested convention on July 18 in Cleveland. The chances of a decisive victory ahead of the GOP convention are looking increasingly slim. There is also a little-known RNC rule known as Rule 40, which, depending on who you talk to, could either matter very little, or signal the beginning of the apocalypse. We’ll get to it later.

A contested convention begins the same way all other conventions do; with all the party’s delegates (both unbound and bound) voting by ballot on the party’s nominee. But unlike in previous years, it won’t just be symbolic. If a majority of the 2,472 delegates that vote in this year’s Republican convention don’t pick a single candidate in that first ballot, then it gets really interesting. The party will then be forced to move to a second round of voting, this time with an estimated 59 percent of the total delegates declared unbound for the first time. Meaning, all the formerly bound delegates for Trump, Cruz, and Kasich can abandon ship and vote for whoever they want.

If Republicans are forced to move on to a second ballot in Cleveland, it will be the first time it’s happened since 1948. Even in the last contested convention in 1976, incumbent president Gerald Ford won the majority of delegates over Ronald Reagan on the the first ballot.

If no majority is declared in the second round, the RNC will be forced to move on to a third round of voting. This time, a total of 80 percent of delegates will be unbound. Large states such as California will free their delegates. Delegates that were still bound to candidates that dropped out could, according to their state rules, be unbound at this stage. It’s highly likely the nomination will be settled at this point.

But what if it isn’t? Sigh. Then there will be another round of voting, and another, until a majority is finally declared. There’s definitely precedent for this happening. According to CRS, the longest convention vote in history was the 1924 Democratic convention, which took a total of 103 ballots and 17 days to nominate John W. Davis. Thankfully, times have changed and everyone has Netflix now, so it’s unlikely this will occur. More than likely, the RNC will step in at some point and declare a new set of rules to make the selection process easier. Or people will start getting hungry. Whatever comes first.

What’s the delegate count after Wisconsin?

Cruz made away with 36 of Wisconsin’s 42 delegates on Tuesday night. Trump gained only six.

According to the Associated Press, the delegate tally as of April 7 is:

What needs to happen for Donald Trump to avoid an uncontested convention?

Donald Trump would need to win 55 percent of the delegates in the states remaining in order to reach the 1,237 delegates needed to clinch the nomination, according to Reuters. The odds of that happening are unlikely. Trump is favored to win in New York, the state up next to hold its primary, which will happen on April 19. Meanwhile, Trump is polling weakly in California overall. The state’s heaping pot of 172 delegates will be doled out by congressional district, winner-takes-all style, on June 7. Much is likely to happen before then.

Cruz’s chances of grabbing more than 80 percent of the remaining delegates are—well, let’s call it unlikely.