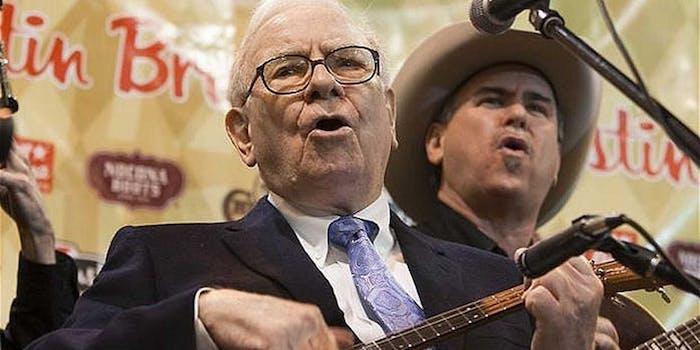 Warren Buffett says you should ‘stay away’ from Bitcoin

The investment guru casts doubt about the real value of Bitcoin.

Superstar investor and philanthropist Warren Buffett, dubbed the Oracle of Omaha for his ability to predict the financial future with crystal ball like clarity, has made his pronouncement on Bitcoin—and it isn’t good.

During an appearance on CNBC Friday morning, Buffett gave a short and dismissive appraisal of the cryptocurrency, advising investors to “stay away from it.”

“It’s a mirage basically,” he said during a brief roundtable discussion about the virtual currency.

Buffett, who consistently ranks among the richest people in the world, said that Bitcoin was an efficient and anonymous way to transmit money, but said it was no more valuable, in and of itself, than a check.

“The idea that it has some huge intrinsic value is just a joke,” Buffett said.

Buffett’s appraisal has already riled up Bitcoin enthusiasts—a group known for their rabid defensiveness (just ask Newsweek). On Reddit, one thread about Buffett’s comments already had more than 600 responses.

“To say that ‘Bitcoin has no intrinsic value’ is [a] daft thought,” writes Reddit users Polycephal_Lee. He added, “It’s revolutionary, disruptive, and hugely valuable. The fact that he can’t see this does not mean it does not exist.”

Buffett might not change any minds among the staunchest Bitcoin backers—many of whom are both financially and emotionally invested in the experimental currency—but Buffett, who’s made his entire fortune as chairman and CEO of Berkshire Hathaway, has been dubbed an “oracle” for a reason. Buffett specializes in “value investing”—an investment strategy that eschews market bubbles in order to find stocks that have been undervalued by the rest of the market. It’s a strategy dependent on shrewd and objective analysis.

Although Buffett doesn’t see any value in Bitcoin as a currency, he suggested that Bitcoin has the potential to evolve into a more reliable money transfer system for the online world.

Bitcoin’s trading value exploded last year to more than $1,000 per Bitcoin at it’s peak, but with the recent collapse of Mt. Gox, regulatory crackdowns by world governments and the rise of competing cryptocurrencies, it’s been on the ropes as of late.