After reaching an all-time high average of about $1,100 per bitcoin on Nov. 30, the famous digital currency is falling fast.

Although the price of Bitcoin has steadily declined over the last month, especially bad news hit early this morning when BTC China, the world’s largest exchange, suspended deposits of Chinese renminbi due to Chinese government regulations introduced on Dec. 5.

This was the message BTC China left for its customers this morning:

“Dear BTC China valued customer, Due to new government regulations, BTC China will temporarily suspend CNY deposits. BTC deposits/withdrawals and CNY withdrawals are not affected, and will continue to operate in the interim. Rest assure that BTC China will continue to operate normally. Please pay attention to our notices for updates, as we find other ways to allow for CNY deposits. We deeply apologize for any inconvenience. BTC China, December 18, 2013” 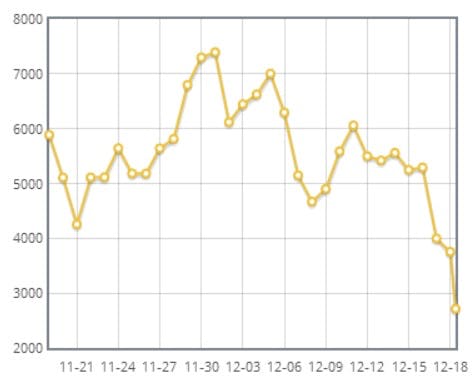 The price of Bitcoins in China

“We essentially got notice from our third-party payment provider today that they will discontinue accepting payments for us and new deposits,” Bobby Lee, the CEO of BTC China, told the South China Morning Post. The exchange is still operating legally, but without accepting any Chinese customers, the company’s future prospects are becoming increasingly hard to predict.

“The legitimacy of the RMB as a currency should not be challenged,” said Hao Hong, head of China research at Bank of Communications. “Having another substitute currency working behind the bank makes the system a lot messier than it should be.”

It was initially unclear how the new rules would affect the currency, which had been riding a wave of major Chinese investment to high prices and optimism.

In the minutes since he first wrote that comment, his fortune has grown smaller still.

As prospects rapidly dim in China, a palpable sense of fear and uncertainty is saturating certain parts of the Bitcoin community. Some others see it as just another bump in an already turbulent ride.

No one, however, sees it as good news.