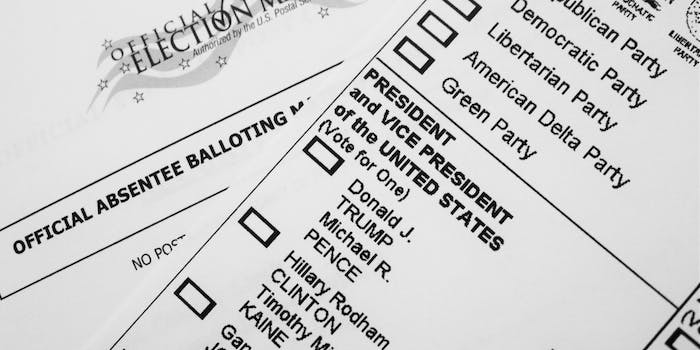 The security of the upcoming 2018 midterms is increasingly in doubt.

At Def Con‘s Voting Village this year, hackers showed how woefully insecure our election hardware is. Voting machines used in more than 23 states are open to being remotely hacked—and in some cases, it can take less time to do than voting itself.

The information comes by way of Def Con’s September Voting Village report. According to the report, the voting tabulator used in 23 states is open to a network-based attack. Such an attack could effectively change a high number of ballots, potentially changing the outcome of a presidential election.

A second machine used in 18 states can be hacked in less than two minutes. On average, it takes a person six minutes to vote. Other vulnerabilities, including one that was first exposed more than ten years ago and still hasn’t been patched, were also explored.

Both hackers and election officials are well aware that our voting infrastructure is not as secure as it should be. Last year at Def Con, a group of hackers defeated 30 different voting machines in under 90 minutes. Still, America is having trouble appropriating funds to this issue of national importance.

Alex Padilla, California’s Secretary of State, shared thoughts on election security in a piece published on the Hill in August. Padilla explained that the recently appropriated $380 million for national election security isn’t new funding, but rather the final allotment of funds approved back in 2003 after the “hanging chad” issues in the 2000 election.

“There has been no new additional funding authorized to address our modern security challenges. To make matters worse, this month, the Republican majorities in both the House and the Senate defeated measures that would have appropriated $250 million for election security grants to states,” Padilla said. “Protecting our elections from foreign interference is a matter of national security.”