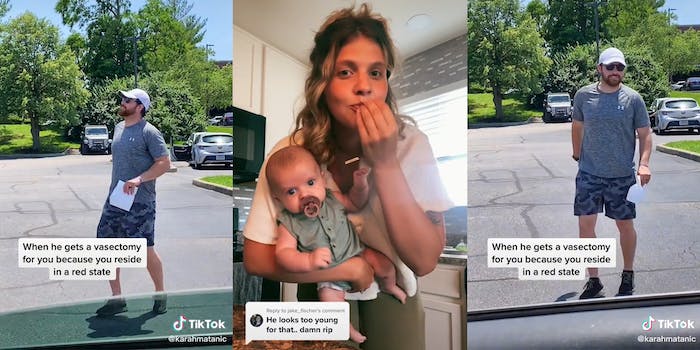 ‘When he gets a vasectomy for you because you reside in a red state’: Woman films partner right after his vasectomy

"The definition of 'if he wanted to be would.'"

Following the Supreme Court’s repealing of Roe v. Wade, the landmark case that allowed for abortion rights throughout the United States, many states heavily restricted or outright banned abortions.

While many of these new bans have yet to be tested in the courts, abortion is now banned in at least 10 states with many others likely to follow, per the New York Times. Furthermore, there is a concern among some Americans that the Supreme Court may repeal further rights from Americans related to reproductive health.

Specifically, Clarence Thomas’ concurrence in the recent Supreme Court case indicated that he was willing to “reconsider” numerous cases related to the personal right to privacy, per Politico. One of the mentioned cases in his concurrence is Griswold v. Connecticut, a case that established a personal right to purchase and utilize contraceptives.

If this case is repealed or “reconsidered,” as Thomas suggested, it might lead to an outright ban on contraception, or deference to the states to make their own laws surrounding this right.

This has caused fear in red states. In response, some people are taking drastic measures to ensure their ability to prevent pregnancy in the future, such as stocking up on Plan B—and getting vasectomies.

One such case recently went viral on TikTok. In a now-viral video, user Karah (@karahmatanic) shows a man, who Karah claims recently completed a vasectomy, waiting to be picked up.

“When he gets a vasectomy for you because you reside in a red state,” she wrote in the text overlaying the video.

Her video currently has over 3.8 million views.

While there is little up-to-date nationwide data on the subject, Bloomberg claimed earlier in the month that several polled clinics offering vasectomies were receiving an uptick in calls and appointments.

“In Ohio, where abortions are now prohibited after six weeks into pregnancy, the Cleveland Clinic went from lining up three or four vasectomies a day to 90,” author Sri Taylor wrote. “Des Moines, Iowa, urologist Esgar Guarín said he typically performs 40 to 50 vasectomies a month; last weekend alone 20 men registered. Koushik Shaw of the Austin Urology Institute in Texas said his office received about 70 calls within the hour of the ruling.”

On TikTok, most users supported the move.

“This is amazing,” a third wrote. “I love men who truly step up not just talk the talk.”

Others shared their own vasectomy stories.

“Got mine in ’15. damn good decision,” a TikToker claimed.

While one of the top comments urged viewers to “be reminded that being pro choice does not mean pressuring or forcing your man to get a vasectomy,” nothing in the video indicates Karah pressured her partner into getting one.

“Regardless of what color your state is, why not get one when your family is complete?” another commenter asked. “Mine had one years ago.”

This may have been the intention for Karah’s family. In a follow-up TikTok, she responds to a comment by showing one of her three kids, saying she has “two more just like them.”

“Thank you for bringing the same energy that they bring into the doctor’s office when I wanted to get my tubes tied,” she shares with heavy sarcasm.

The Daily Dot reached out to Karah via TikTok comment.