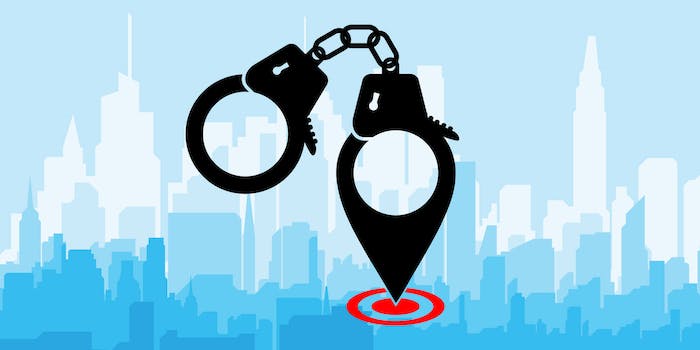 What are geofence warrants and how can police use them against protesters?

A bill in New York seeks to prohibit them.

There’s no question that police surveillance of Black Lives Matter protests across the country have raised alarms: but a relatively new form of surveillance, geofencing warrants, have prompted particular concern.

Geofencing warrants, or reverse location searches, are grabs of anonymous location histories from Google that show the proximity of cell phones to a specific area at a designated time.

Law enforcement has used the warrants to gather information for investigations into murders, robberies, and arson, but they can also use geofencing to track protesters or anyone near a given protest.

Protests against police brutality and racism have sprung up across the country since the police killing of George Floyd. Floyd died after being pinned down by police for almost nine minutes.

While geofence warrants are a fairly new tactic, surveillance of Black activists is not. In 2017, a leak from the FBI unveiled a domestic terrorism category named “Black identity extremist.”

Given the push back against surveillance of the protests, concerns have been raised about geofence warrants being part how law enforcement investigates.

The Drug Enforcement Agency (DEA) received approval to reallocate resources towards “(conducting) covert surveillance” to assist local and state police on May 30. The DEA says it intends on restoring order in light of protests, according to a memorandum obtained by BuzzFeed News.

Their goal is to gather information on the protesters, but geofencing doesn’t discriminate. The tactic grabs data from any cell phone within range even if the user is not participating in protest.

So whether you’re rallying with the Black Lives Matter movement or you just happened to drive by, the police can locate your whereabouts with data from companies like Google.

Geofencing is a tool commonly used by advertising agencies which allows marketing teams to send ads to their target audience. That demographic is within a defined geolocation.

So a tourist visiting New York City for the first time may begin to receive ads for Saks Fifth Avenue as they drive through the Holland Tunnel.

While Apple, Facebook and other tech companies have geofencing capabilities, Google is often used for reverse location searches due to one specific setting: location history.

Google stores these locations in a database called Sensorvault according to the New York Times.

A spokesperson for Google said they do not discuss current geofencing warrants or the amount of warrants issued this year.

How do police use geofencing for warrants?

Police can issue a warrant to Google that requests cell phone location data during a place and time.

Once the police have found the numbers that match their suspect, Google reveals the identity and other information associated with the number. It is a process that Google says protects users.

“We vigorously protect the privacy of our users while supporting the important work of law enforcement,” Richard Salgado, director of law enforcement and information security at Google, said in a statement. “We developed a process specifically for these requests that is designed to honor our legal obligations while narrowing the scope of data disclosed.”

But, Google can send hundreds of locations to police under one warrant, according to the New York Times.

Last year, the Times reported that Google received up to 180 geolocation requests in one week. One of the states that is known for using geofencing data is Minnesota, the Times reported. Minnesota was the epicenter of the first wave of recent Black Lives Matter protests.

Myrie and the Surveillance Technology Oversight Project (S.T.O.P.), a privacy and criminal justice advocacy group, drafted a bill to prohibit these warrants in February before protests began.

Myrie told the Daily Dot that they should be deemed unconstitutional especially now under the pretext of the Black Lives Matter protests.

“We have people who are, one, afraid of a global pandemic and, two, have not been civically engaged in the past, taking both of those things into consideration, still are going out to exercise their constitutional right to express their rage and hopelessness in the brutality that we’ve seen,” Myrie said. “The fact that they can go out and express this constitutional right and then be subject to an unconstitutional warrant to me is incredibly alarming.”

It probed Myrie to ask the NYPD if they were using geofencing tactics against protesters.

“So @NYPDnews should tell us right now whether they have, currently are, or intend to use reverse warrants resulting from peaceful protests. Reverse warrants are constitutionally dubious under normal circumstances, they are downright dangerous now,” Myrie tweeted in a thread.

Myrie said the NYPD has not responded to his inquiry about geofencing. The department said they do not share their investigation methods, according to Myrie.

How to prevent geofencing from sweeping your device

Users must opt-in to the location history feature for Google to save user data. Saved histories can also be deleted entirely or set to delete every three or 18 months.

The safest way to prevent police surveillance is to leave the cell phone at home. But, that is not practical for most people.

Protesters carrying cell phones should turn off their location services, Bluetooth, Wi-Fi and turn on airplane mode if they wish to avoid geofencing.

In most circumstances, Google will notify users who’s information has been used in a geofence warrant. But in the past, the police have issued gag orders to prevent Google from revealing an on going investigation, according to CNET.

However, none of these preventative measures protect non-protesters from geofencing. Myrie says it is just another tactic police can use to surveil communities of color.

“If you are somebody that already lives in a community that is over-policed and where there are hotspots, quote unquote, of crime, then just living there should not subject you to these warrants,” Myrie said.